While looking at the 1940 U.S. Census, I noticed one of the questions was: “Attended school in 1940.” I found this question interesting because I did not see this type of question in earlier censuses. Most Greek immigrants who we were researching were adults, and it is not surprising that the answer to the question was “no.” I then looked at the highest level of school completed. Four Greek immigrants in the 1940 U.S. Census for Alexandria had completed college, which was somewhat extraordinary.

The Hapsas family in Ward 1 was the only instance I found that both husband and wife who completed four years of college. To me, this was very impressive, because many Greek Immigrants did not have access to higher levels of education.  They also had two children, Charlie, age 13, and Mary, age 15, both of whom were in school.

The Vaylos family in Ward 5 consisted of Dennis, the father (56), Pearl, his wife (56), and their two sons: Gus (32) and Andy (26). All the members of the Vaylos family were born in Greece except for the youngest, who was born in Virginia.

In 1935, the Hapsas family was residing in Columbus, Georgia while it states the Vaylos family was residing in the same house in Alexandria. The Vaylos family did not appear in the 1920 U.S. Census for Alexandria, but they might have been living elsewhere in the country since their 26-year old son was born in Virginia. The Vaylos family lived into Ward 5, which did not exist in the 1920 U.S. Census.  That area was part of Alexandria County, now known as Arlington County.  It could be that they were there before annexation.[2]

The maps below from 1941 are of the Hapsas and Vaylos families’ homes: 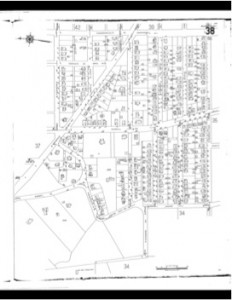 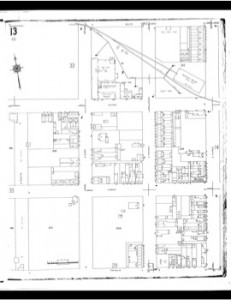