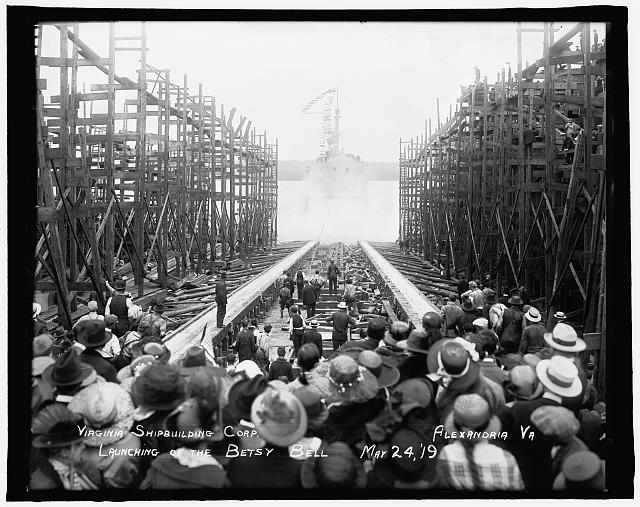 After Battery Cove was filled in 1911, the Virginia Shipbuilding Corporation was established on the landfill six years later. Here, World War I merchant ships were built. According to the official website for the City of Alexandria, “The metal-hulled vessels were constructed on concrete shipways and launched into the river.”[1]

On December 7, 1917, the Fleet Corporation, which represented the federal government, entered into a contract with the Groton Iron Works to construct twelve steel ships.  Shortly thereafter, Groton Iron Works defaulted on the contract, and the rights of the contract were transferred to the American Shipbuilding Company, later known as the Virginia Shipbuilding Corporation. The twelve steel ships were to be 9,400 tons dead weight carrying capacity, with the Fleet Corporation paying $1,504,000 for each.[2]

Soon, Virginia Shipbuilding Corporation was responsible for employing approximately 3,000 men.[3] A large number of these men were Nordic immigrants from Denmark, Norway, Sweden, and Finland. The shipyard flourished during World War I, but quickly met its end. Facing bankruptcy and lawsuits from the United States Shipping Board, the shipyard closed in 1922.[4]

1. Introduction 2. Why the Swedes Left 3. Why the Danes Left 4. Why the Finns Left 5. Why the Norwegians Left 6. The Virginia Shipbuilding Corporation 7. Work in Alexandria 8. Living in Alexandria 9. Conclusion 10. Bibliography