Bolivian immigrants exhibit a special place in Alexandria, Virginia where they create fluid spaces on the soccer field, in the dance studio, or through their own news sources. Bolivian immigrants own these leagues, studios, and news sources and some own restaurants and small businesses throughout the city. However, most Bolivians do not practice what geographers Marie Price and Elizabeth Chacko call “ethnic entrepreneurship,” where an immigrant’s full time job serves the entire community and not just their ethnic group.[i] Instead, they create fluid spaces for religious and recreational activities to preserve their ethnic heritage. Rather than force themselves into previously established spaces, Bolivian immigrants practice entrepreneurship and create recreational activities that exist outside of their full time jobs. Bolivian immigrants in Alexandria create their own spaces where they can keep their culture, language, and tradition alive.

Soccer is one of the most significant fluid spaces that Bolivian immigrants in Alexandria, as well as Bolivians and Latino migrants throughout the world, inhabit. As of 1998, reporter Gabriel Escobar for the Washington Post estimated there are more than 450 Latino soccer leagues in the Washington metropolitan area.[ii] Given the amount of Facebook pages that exist for teams from D.C., Falls Church, Arlington, and Alexandria, it is likely that the number has increased by the hundreds since 1998. In Alexandria, Virginia, several indoor and outdoor men’s futsal leagues exist for Bolivians. One league in particular, the Virginia Sudakos Pro FC, has a team in Alexandria called the Alexandria City Futsal League.[iii]

What is significant about these leagues is that the players and their spouses hold full time jobs and still make the time, spend the money, and dedicate their life to these amateur teams. Some of the players in the Alexandria City Futsal League, like Fabian Vega, choose to make soccer their career. Fabian is a head coach in the league as well as a director at a soccer camp in Centreville.[iv] However, for many of these players, soccer is something they find time for amidst their long work days. Many Bolivian immigrants actually know about these leagues before they even move to Alexandria and are eager and often expected to join. It is a way for Bolivian immigrants to gain support and social networks among one another and preserve their traditions and culture.

Although these soccer leagues are evidence of some type of ethnic organizing, the reason they are considered fluid spaces is because they do not actually occur in any one concrete place. There are not any specific Bolivian soccer fields. Instead, these teams create spaces for games and tournaments where they can, at schools, parks, and recreation centers. Figure 6.1 is a map of the various fields throughout Alexandria and Northern Virginia where these adult soccer leagues play. The Virginia Sudakos FC league posts these locations on their Facebook page whenever a tournament or game is coming up, whether it is at the Cora Kelly Recreation Center, Fairfax Sportsplex, or a publicly owned field.[v] On the City of Alexandria website, these leagues can rent out fields at schools and parks for a reasonable price.[vi] None of these spaces or recreation centers are owned by any league in particular, but they become the avenue where Bolivian and other Latino immigrants redefine ethnic space.

(Courtesy of virginiahumanities.org at the Columbia Pike Festival in Arlington, Virginia) 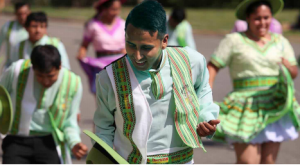 (Courtesy of George Newcomb, “Dancing in the Streets to a Bolivian Beat,” Connect, October 2016, 3.)

Similar to amateur soccer leagues like Virginia Sudakos FC, Bolivian dance groups are another example of the fluid spaces that Bolivian immigrants in the metropolitan area create. Bolivian dancers appear at almost every big festival in Northern, Virginia, from the National Hispanic Heritage Month Parade in D.C. to the Columbia Pike Festival in Arlington. Bolivian dancers not only share their culture with beautiful dresses, music, and dancing, but they embody and preserve their ethnic heritage. Similar to soccer, there is no concrete space that Bolivian dancers make, nor is dancing necessarily their career, but they practice and cherish it as a means to preserve their culture.

Many Bolivian dancers explain that through dancing they are able to both share and sustain their culture. Erwin Vargas, the Bolivian dancer in Figure 6.3 and a call center employee in Washington, D.C., explained “when I’m dancing, I feel like myself.”[vii] Erwin learned how to dance through a nonprofit group called Salay Bolivia U.S.A. when he was seventeen.[viii] According to Erwin, a lot of young Bolivians learn how to dance through a similar avenue or organization and perform at events all throughout Northern Virginia.[ix] These young Bolivian dancers like Erwin do not make dancing their career, but instead, carve out time to make it a social and cultural piece of their lives. 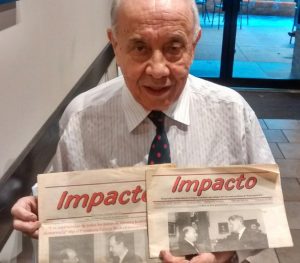 News and social media are other ways in which Bolivians create fluid spaces that allow them to stay current with one another in the United States and throughout the world. Newspapers like Impacto and El Tiempo Latino as well as social media sites like Facebook allow Bolivian immigrants to create space for themselves instead of settling with being underrepresented in popular news. These news sources and use of social media are evidence that the transformation of information and creation of social networks can be done without making permanent structures or neighborhoods. Impacto is a newspaper that was created by Bolivian immigrant named Julio Duran who wanted to share news with Latinos everywhere after experiencing discrimination in the American journalism business. In a Washington Post article from 1986, reporter Dianne Saenz explained that Duran started Impacto in order to let the public know that there was more to Latin American news than “drugs and disaster.”[x] Through Impacto, Duran created a fluid space where Bolivian and Latino immigrants in the metropolitan area as well as throughout the world could connect with one another and share information. The spark that Duran started in the 1980’s is still firing today through El Tiempo Latino. El Tiempo Latino is a side publication of the Washington Post where relevant stories about global politics, economics, and topics that affect Latino immigrants are available.[xi] In addition to these two news sources and many like it, many Latino immigrants depend on social media to interact with one another and share news. Most of the information available on Bolivian immigrant soccer games, dance events, and more can be found only on Facebook. Because many Bolivian immigrants in Alexandria and throughout America cannot access information about their country of origin or the countries where their fellow migrants may live, they rely on sources like El Tiempo Latino, Impacto, and social media to share and provide information. They carve out spaces for themselves out of necessity and a wish to remain connected to Bolivian social culture.

Through starting and sharing news, creating and joining soccer leagues, and learning and demonstrating dances, Bolivian immigrants in Alexandria, Virginia connect themselves to one another and Bolivians throughout the world. In her article “Placing Transnational Migration,” geographer Marie Price explained that Bolivian immigrants and their fluid spaces and transnational connections are evidence that place, space, and identity are “neither here nor there but some place in between.”[xii] Price’s argument captures how Bolivian immigrants have changed geographers, historians, and Americans’ definition of what immigrants’ preservation of ethnic culture looks like in the twenty-first century.

[i] Marie Price and Elizabeth Chacko, “Mixed Embeddedness of Ethnic Entrepreneurs in a New Immigrant Gateway,” Journal of Immigrant & Refugee Studies 7 no.3 (2009): 329.