Reading Donna R. Gabaccia’s Italy’s Many Diasporas motivated me to reconsider my former ideas about the ways in which people migrate and the complexities of their movement. This great migration of people occurred from 1871 to 1921, whereby  16.6 million inhabitants departed Italy.[1] Italians came from all parts of the peninsula, with some staying permanently in the U.S., while others traveled back and forth, and still others gradually returned home. Gabaccia suggests that, to understand the migration further, one must look to the wider world and consider the anti-imperialist revolutions in the Americas during this time. This created sparsely populated states along with millions of jobs for artisanal and industrial workers.[2] It was the global market fulfilling the needs of peasant families (and vice versa) with humble skills looking for work. Perhaps this is precisely why Domenico Oresto Colangelo appears on the passenger list of the Duca degli Abruzzi whereby he arrived on April 16, 1920 in New York City, with plans to go to Pittsburgh, PA. [3] 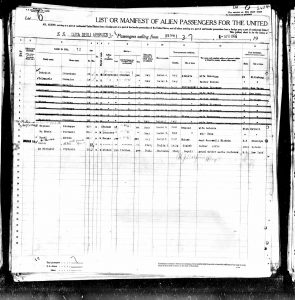 Domenico was born February 2, 1901, to Felice and Angela, in Abruzzo, Italy, in the village of Ateleta. He traveled to the U.S. on April 16, 1920, searching for work and settled ultimately in Alexandria, Virginia. He appears on the 1940 U.S. Census along with his wife, Virginia, and children. The census records indicate a total of 4 daughters and 3 sons residing in the household at 308 Cameron Street.[4] The records likewise show Domenico working in construction for a steam shovel company originally.  By 1959,  the local city directory confirms his upward mobility to President of Anco Builders Incorporated. [5] On November 20, 1955, The Washington Post announces the purchase of a large land tract by Anco, adjoining the Belle Haven Country Club for the building of new homes.[6] 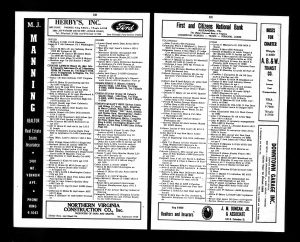 See more regarding Anco and the purchase of land for Belle Haven in Alexandria, VA:

When migrating, many Italians turned to familiar faces for information and advice. They depended on other migrants who returned home to Italy to help them navigate their own journey. This may have very well been the case with Domenico, as his own father, Felice, once traveled to the United States in 1893 as a laborer.[7] It was with certainty that Domenico asked his father’s advice when making his own personal journey 22 years later. 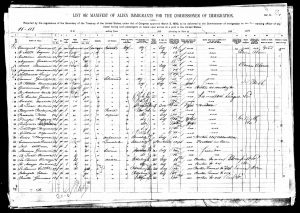 Manifest of Alien Passengers Bound for New York City for March 3, 1893. Photo is courtesy of ancestry.com.

Domenico married Virginia Giammittorio, who was born on December 24, 1906 in Lynchburg, Virginia to David and Rosina. Both of Virginia’s parents were Italian immigrants who came to the U.S. in June 1906, just 6 months prior to Virginia’s birth.[8] David Giammittorio applied for naturalization September 19, 1921, and took the oath of allegiance becoming a U.S. citizen on January 4, 1922.[9] Interesting as well, the 1940 U.S. Census confirms that Virginia’s parents lived at 313 Calvert Street, just a few doors down from their daughter and her family. 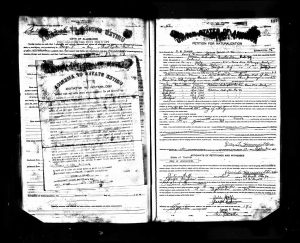 Cultural and personal identities of Italian migrants are uniquely defined and vary among those individuals– Italian migration was not a one size fits all. Some Italians returned home like Domenico’s father while others made new and permanent lives in the U.S. Often, Italian families who made a permanent home in the U.S. stayed close by one another, as was the case with the Colangelos and Giammittorios. It is special to know that Domenico Colangelo played a part in building up the city of Alexandria as evidenced in the Belle Haven community, which still stands today. This is the case with many Italians who aided in building this country and by making it great.