bChinese Americans across the country faced nativist attitudes due to the Chinese Exclusion Act. In Alexandria in particular, evidence of nativist attitudes can be found predominately in the local newspaper, the Alexandria Gazette. The most common form of racism that Chinese faced in Alexandria were attacks on their businesses.  In the 1890s alone, there were five instances in which laundries were attacked.

Usually, the “Local Brevities” section of the The Alexandria Gazette reported these incidents. For example, in 1895, the following story appeared:[1]

This story as well as the others speaks to several peculiarities in terms of nativist violence towards Chinese in Alexandria. First of all, most of these incidents were perpetrated by boys who were presumably white.  The motivation for these crimes, however, was always left unsaid in the local newspaper.  Furthermore, unlike other immigrants, Chinese immigrants were usually portrayed as the victims of crimes rather than perpetrators.  For other immigrant groups, such as Italians, they were often labeled as criminal in order to justify their second-class status. It can be assumed that the reason why this may be the case is that Chinese men were often seen as effeminate in American popular culture not only because of their employment in laundries but also because of their hairstyle and dress.

Further evidence of nativist attitudes towards the Chinese are reflected in the Record Group (RG) 85 files for Alexandria’s Chinese residents. RG 85, a series of case files maintained by the Immigration Bureau and later the Immigration and Naturalization Service (INS), were used to document legal and illegal entries of immigrants, the majority of whom were Chinese. Whites feared that Chinese were manipulating the immigration process in order to claim false citizenship or permanent residency. Within RG85, there were several interviews with Chinese immigrants from Alexandria. For example, 9 year-old Hong Tow Moy, who applied for citizenship under the pretense that he was the son of deceased American citizen Moy Sing, speaks to anti-Chinese anxieties among immigration inspectors.[2] During the twentieth century, Chinese attempted to gain entry into the country by creating paper families after the US created the legal precedent that granted children of US citizens, regardless of their birthplace, citizenship.  The burning of immigration offices in San Francisco after the 1906 Earthquake also meant that immigration inspectors had very little documentation to use to manage would-be immigrants.[3] In the case of Hong Tow Moy, his file included interviews conducted by an immigration inspector in New York City. These interviews highlight the distrust the government had toward Chinese immigrants. For example, the interviewer refers Hong Tow Moy’s brothers as “alleged brothers.” To find discrepancies, the questions the inspectors also asked were difficult and detailed, particularly for a child of Moy’s age. For example, the interviewer asked the child questions such as where his school, Yung Jen Academy, was located in relation to his village. However, they asked it in a difficult manner: “Do you claim that the school you attended is only 4 or 5 jungs away from your village?”

Hong Tow Moy’s answer when asked about his schooling 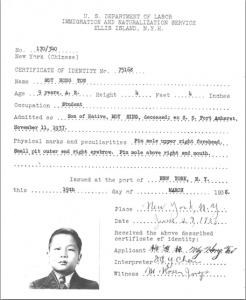 This shows the attempts made by the interviewers to find discrepancies in his answers to prove that he was falsely claiming familial ties and, therefore, American citizenship. Despite the rigorous process, Moy Tow Hong was ultimately admitted as a citizen to the United States as the son of a native-born American in 1938.