The Chinese emigrated from China because of high unemployment due to enormous population growth and unavailability of cultivatable land. From 1787 to 1850, the total of China’s population grew by 47%, which made it impossible for many Chinese to own enough farm land to support themselves. Guangdong Province had the highest population growth at 79.5%; most Chinese immigrants came from this province.[1] Industrialization in China would have eliminated laborers dependency on agriculture to be economically successful, but European imperialism greatly limited access to the education, technology, and markets that fueled the industrial revolution. European intervention began with the Opium Wars (First, 1839- 1842, and Second, 1856-1860). Opium Wars created political instability in China and economic dependency on both the U.S. and Great Britain.[2]

Most Chinese who immigrated were young, single men who did not want to establish permanent residency in the U.S. and would therefore send money to their families or save money and then return to China. These immigrants became known as “sojourners” because their journey was seen as temporary.[3] The initial reason why Chinese immigrated to the U.S. was because gold was discovered in California, known in China as “The Gold Mountain,” in 1848. Two years after the discovery of gold in California, the San Francisco Customs House reported 450 Chinese immigrants, a year later 2, 716, and by 1851 20,026. These statistics means in two years, from 1850 to 1852, the number of Chinese immigrants coming through San Francisco increased by 4,450%.[4]

The railroad and agriculture industry also provided jobs for sojourners. It is estimated around 37,000 Chinese laborers worked on the Transcontinental Railroad that was completed in 1869. Southern plantations also offered five year contracts to Chinese immigrants to replace slave labor lost after the Civil War.[5]

Sojourners were widely accepted by the U.S. because they were seen as a very cheap labor resource. The Burlingame-Seward Treaty (1868) demonstrates the acceptance of Chinese immigration by capitalists. In 1868 Anson Burlingame, the appointed minister to Qing Empire, installed a more cooperative economic policy between the U.S. and China to replace the previous imperialistic one. Although the Treaty did not grant the possibility of naturalization to Chinese immigrants, it guaranteed them the liberties and religious freedoms in American society. Despite this treaty, nativist resentment increased against Chinese immigrants by the early 1870s.[6]

Evidence of the importance of Chinese immigration in U.S. domestic politics can be found in the Morey Letter incident that threatened James Garfield’s campaign. During the 1880 election, a fraudulent letter addressed to H. L. Morey was discovered that supported the Burlingame-Seward Treaty and was signed by Garfield. The letter was a scandal because it essentially meant that Garfield wanted to continue to allow for the flow of Chinese immigration to the United States, which both Democrats and Republicans opposed.[8] 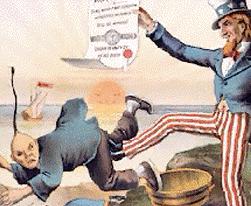 The Chinese Exclusion was a dominant aspect of US politics during the 19th century.

The Chinese Exclusion Act (1882) was the first policy passed by the federal government that barred immigration solely on the basis of race and occupation.[9] Initially, the U.S. had an open door policy towards China, but by the 1870s nativism and job competition among whites led to a groundswell of anti-Chinese sentiments. The Chinese exclusion Act was ratified by the Chester Arthur administration and was widely welcomed by most of white society.  The Brooklyn Daily Eagle noted the popularity of the bill in Congress; only 5% seemed opposed.[10]

[9] “The Chinese Exclusion Act was approved on May 6, 1882. It was the first significant law restricting immigration into the United States”, http://www.ourdocuments.gov/doc.php?doc=47 (Accessed December 7, 2014).