When Chinese migrated to the U.S. South in the late nineteenth century, they entered a society that was grappling with a binary racial hierarchy that placed whites over blacks. However, the Chinese did not fit into either of these categories based on popular and scientific notions of race at the time. Therefore, they were either lumped with whites or blacks (depending on local context), or they were classified as a third racial group.  The general consensus among historians of Chinese immigration in the U.S. South is that this group moved from being considered to be equal with African Americans, although still distinct, to becoming considered “honorary whites” by the 1960s.[1] Race relations for the Chinese in Alexandria, however, were very particular and do not necessarily correlate with how race played out in various other parts of the U.S. South.

In other parts of the South, Chinese immigrants were considered to be equivalent to African Americans, and there was a lot of interaction between the two groups. This phenomenon was documented by James Loewen in The Mississippi Chinese, where Chinese grocers sold food and other services to African Americans in small community along the Mississippi Delta. In the early part of the twentieth century, Chinese and African-American marriages were not uncommon due to the fact that Chinese women did not usually immigrate to the U.S., and having African American wife would increase a grocers social status amongst the black community.  Chinese men were only expected to remain financially faithful to their spouses in China.[2]

However, race relations were different in Alexandria as local politics took precedent over state and national laws within the city. By looking at newspapers, namely the Evening Star, it is apparent that the Chinese in Alexandria has more freedom in terms of how they could interact interracially. There are several instances that prove that the Chinese population in Alexandria had more liberal racial politics. For example, there are several recorded instances in which Chinese immigrant men married white women in Alexandria because they were unable to in other jurisdictions. In an 1897 article in the Evening Star, it was noted that a Chinese man by the name of Toey Fook Sing obtained a license to marry a white woman named Mary Young in Alexandria after being denied from Baltimore[3]. 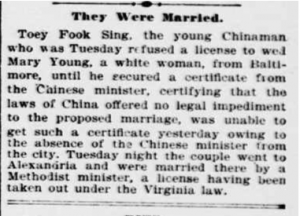 In addition, the Washington Post and the Evening Star described a laundryman, detective and interpreter of Washington, Moy Gop Yahn was married to a white women named Lillian Patton in 1900 in Alexandria.[4] Yahn and Patton were denied their license in Washington, D.C. because Yahn’s “nationality operated against” him and therefore it was “made necessary” to go to Alexandria.[5] In the case of Moy Gop Yahn, it was ultimately decided by local officials that they could get married, showing that many white Alexandrians were not threatened by the small Chinese community in the city.

Other occurrences also prove this phenomenon. For example, Chinese immigrant business owners were listed as white in the city directories. By the 1930s, Chinese immigrant children attended the Jefferson School, a white-only elementary school in Old Town.

The reason for the partial acceptance of Chinese–though they still faced nativist violence perpetrated by young boys–is intriguing.  Perhaps it is due to the small population of Chinese immigrants in the city, and that they were not seen as a threat.  The possibility of interracial marriage, however, is surprising considering Alexandria was not immune to lynching or threatening to lynch both African Americans and Italians who were reportedly charged with sexual misconduct towards white women.  More work needs to be conducted to better understand the diversity of racial hierarchies that operated in the U.S. South and, especially in Alexandria. 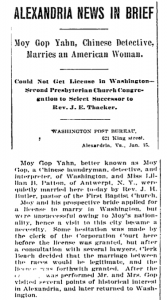