From our readings and discussions this week, I noticed a particular theme when it came to Vietnam and Vietnamese refugees: education was seen as the key to success. In Covert Capital, there were various ways that this education took place. Before the evacuations, Vietnamese recruited into the South Vietnamese Special Forces were trained and educated by American CIA agents. They were taught American songs with the words slightly altered to praise American triumph over Communism, and trained in combat. They were taught the idea that siding with America guaranteed victory; America was their key to success. After the fall of Saigon, refugees were taken to different camps set up across the United States where they were taught American culture and its practices. Once gaining sponsorship, Vietnamese left the camps, but the emphasis on education did not end there.[1]

The main purpose of these educational experiences for Vietnamese refugees was “assimilation.” The idea itself is much more complicated, however, since no one truly assimilates. Vietnamese refugees still held on to their own culture by opening Vietnamese restaurants, speaking Vietnamese at home, and participating in multicultural festivals. What actually happens with “assimilation” attempts is the blending of the two cultures. The children of Vietnamese refugees consider themselves to be Vietnamese American, existing within a culture that is both Vietnamese and American. They adopt certain aspects of American culture while still maintaining their Vietnamese roots, creating a dual identity for these children. Binh “Gene” Nguyen, for example, came to America as a refugee with his family, and the success of his nail salons and school is credited by Gene’s ability to “assimilate.” To Americans he was called Gene, but among the Vietnamese he was still Binh, speaking to the duality of Vietnamese American identity. Although he Americanized his name and business, he will not forget that he is also Vietnamese, an identity is he equally proud of. [2]

The Alexandria Public School system became a very important element of this process through its educating of refugee children. One of the most important goals of assimilation was teaching the English language, and it was done through a variety of ways. Children attending Alexandria Public Schools were taught English through English as a Second Language (ESL) programs (now called ELL). By teaching children English, the hope was that they would take the language home and it would spread to adults. In my research, I found a Washington Post article that spoke to the issues of the language barrier between the Alexandria Public School system and these parents. The article talks about plans to translate basic school document and general school information into other languages to accommodate refugee parents. They were also considering developing a school-based outreach program for children and adults to help “make the social and cultural transition.”[3] I found the article to be interesting because seemed to be a step back from assimilation by translating school documents for these parents, and they emphasize the fact that these accommodations for refugee parents are not a temporary thing. As long as refugees continued coming to the area, the more necessary it was for them to take these steps to help these families transition.

Education and assimilation was seen as a determining factor in the success stories covered by the media. They all played on the idea of the “American Dream,” and how the few success stories that came 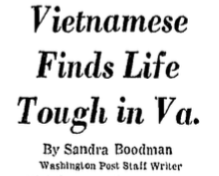 from the Vietnamese American community meant that the dream was still achievable and possible for immigrants in America. I think this dream might have been alive for immigrants willing to assimilate into American culture. The Dinh family is regarded as successful because all six of their children went to the University of
Virginia. Their parents took whatever jobs were available, worked hard, and their children worked just as hard in school. [4]

Not all were this successful.  There were still many barriers, like the menial jobs available to these refugees, the culture shock, and the emotional turmoil of leaving Vietnam and the war itself that kept many Vietnamese refugees from achieving the dream.[5]

[1] Andrew Friedman, Covert Capital: Landscapes of Denial and the Making of U.S. Empire in the Suburbs of Northern Virginia (Berkley: University of California Press, 2013), 123 – 220.

[4] Marylou Tousignant, “A Family Succeeds by Degrees; All Six Children of Vietnamese Immigrants Graduate from U-Va,” Washington Post, May 17, 1996.