Bolivian Americans have had to overcome many obstacles, such as low income, unemployment, language barriers, and lack of medical insurance.[i] Playing soccer is one way many Bolivian Americans de-stress and forget the difficulties that they faced for a few hours. Since 1999, there are more than 450 Latino soccer teams in the Washington Metropolitan area, many of whom cater to the Bolivian immigrant community.  Many teams play on Sunday because Bolivian immigrants are usually working Monday to Saturday, using whatever fields are available.[ii] Soccer has brought Bolivian Americans together and created a sense of community in the area.

During the 1990s and into the early 2000, these soccer games had become an event; whole families would go and spend the day watching soccer games, traveling all over the region. As the games are played, you will find children playing soccer on the sidelines, shouting and laughing the whole time. Bolivian food, such as peanut soup (shredded dried beef and dried corn topped with a based salsa), are served at games.[iii] 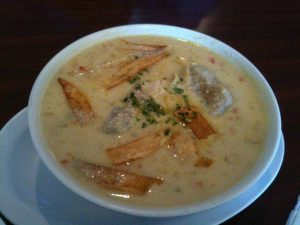 Professional soccer players from Bolivia, who give local immigrants much pride, also impact the Bolivian immigrant community in D.C. For example, immigrants follow Bolivian players on the D.C. United soccer team, most notably Marco Etcheverry who played in the late 1990s and early 2000s.[iv] Any appearances that Etcheverry made, hundreds of Bolivians who lived in the D.C. area were there to see him. Etcheverry’s low key nature did not stop him from signing autographs and taking photographs with fans. The longer that Etcheverry played for D.C. United, the more he became involved in the community. He donated jerseys to local soccer teams, and money to local schools to teach Spanish speakers English. Etcheverry and other Bolivian players who have played for D.C. United were easy for other Bolivian immigrants to relate to because they experienced some of the same difficulties.[v] 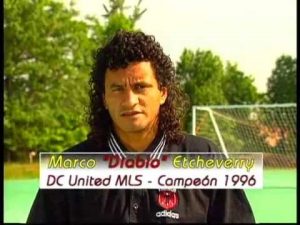 [ii]Gabriel Escobar, “The Other Pro Soccer; In Area’s Latino Leagues, Part of the Game Is Profit, and the Best Players Are Paid,” The Washington Post, November 29, 1998, accessed on November 10, 2016.