Migrants oftentimes have a difficult job of “assimilating” in the face of a new culture and nativism in their new home. While that is the case with most migrants, the English had an easier time than most. Using primary sources, such as the U.S. Census, historians can learn the forgotten past of people in the United States. With this practice, the Cogan family’s obscure life in Alexandria, Virginia became more pronounced.[1] William Cogan was born in London, England in 1828. Along with his mother and father, William emigrated to America when he was a young child.[2] It is possible that Cogan had no recollection of England, and the United States was all that he had ever known. Like most migrants, William did not remain in one place. Instead, he moved to Philadelphia and then to Alexandria, Virginia. William learned his craft as a gas fitter from his time in Philadelphia.[3]

According to the Alexandria Gazette, Cogan became a gas fitter in 1848.[4] William opened up his own plumbing and gas fittering business called Cogan Wm & Sons on 15 North Royal Street.[5] William married Virginia Barton from Fairfax County, Virginia. Virginia remained in their home until her death in 1912.[6] The couple had eleven children together.

William Cogan, and his business, suffered through the Civil War war. There are no records of William Cogan fighting, even though he was only in his 30s. Due to health problems, his children succeeded William Cogan in his business.[7] At the age of 60, William Cogan died. Cogan created a life for him and his family by learning a trade and creating a business. 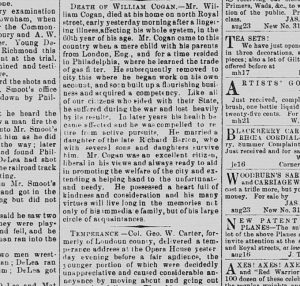