Because the Virginia Shipbuilding Corporation needed unskilled and semi-skilled laborers to build ships, a large number of men migrated to Alexandria by the late 1910s to work.  This need for labor at the Virginia Shipyard also attracted many male immigrant workers from Norway, Finland, Sweden, and Denmark.

The 1920 U.S. Census for Alexandria, Virginia documented Scandinavian-American males who married, but did not live with their families.  Instead these married immigrant men lived with other shipyard laborers in boarding houses.  According to David C. Mauk, author of The Colony that Rose from the Sea, Norwegian Maritime Migration and Community in Brooklyn, 1850-1910, most Norwegian immigrants who immigrated to the U.S in the 1890s “were unmarried, and married men often traveled alone, sending for families later.”1 It can be argued that many married men lived in Alexandria, while their families stayed behind in their home countries.

Out of the 88 Scandinavian Americans documented in the 1920 US Census in Alexandria, only 24 (or 14%) were children and only 16 (or 18%) were women.  Men made up 68% of the Scandinavian-American population in Alexandria. 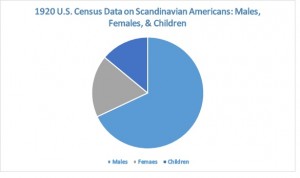 The few Scandinavian-American women who lived in Alexandria did not work outside the home.  The average Scandinavian household in Alexandria was based on patriarchal values, meaning the husband worked and the wife stayed home and cared for the children.  The only family that did not fit this typical patriarchal pattern is the Mattonen family.  Hilda Mattonen listed laundress as her occupation.  Hilda Mattonen was the only documented first generation Scandinavian female who reported an occupation.

1 David C. Mauk, The Colony that Rose from the Sea, Norwegian Maritime Migration and Community in Brooklyn, 1850-1910 (Northfield, IL: The Norwegian-American Historical Association, 1997), 30.