With the political upheaval in Ethiopia in the 1970s, many Ethiopians fled the country in search of safety. Several came to the United States, and as a result, the decades of the 1980s and early 1990s saw an increased number of Ethiopian asylum-seekers.[1] The majority of these migrants settled in the Washington Metropolitan Area, creating the “largest subset of immigrants from Sub-Saharan Africa in the region.”[2] Living in a new country that spoke a different language was not easy, and many feared how or even if they could fit in. Though forced to adapt to their new surroundings, Ethiopians still maintained their cultural heritage through many means, such as celebrating holidays and especially food.

The City of Alexandria embarked on an oral history project in which members of the Alexandria community were asked to share their personal stories and experiences. Four Ethiopian immigrant women were interviewed and all of these women commented on the importance of food and maintaining their cultural heritage. Rhoda Worku, a restaurant owner, discussed how “doro wats are very traditional” and are cooked around big holidays such as Christmas and Easter.[3] Worku explained that doro wat is a chicken dish that is very spicy. It is made with caramelized onions, berbere (a spice mixture), butter, and served with a boiled egg. Zion Bezu, a mother who also teaches Amharic (one of the main languages spoken in Ethiopia) to the community, also mentioned doro wat saying, “my kids—they love doro wat,” but stated she would rather go out and eat it because it takes a long time to cook.[4] Afomia Wendemagegon, at the time of the interview a senior in high school, raved about her mom’s doro wat saying “doro wat is probably like one of the top things” she loves to eat.[5] 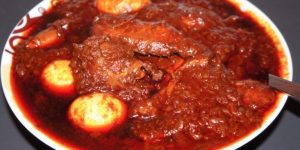 Another food which all four interviewees discussed was injera, a staple in the Ethiopian diet. Injera is a sourdough flatbread with a spongy with a spongy texture made from teff flour. It is used as an eating utensil to scoop up stews and meats.[6] Aida Abdul-Wali, a computer engineer, described injera as a bread that is eaten with the hands.[7] Zion Bezu also described injera as a bread and laughingly said “everything comes with the bread.”[8] Since injera is a staple for the Ethiopian diet, it can be found in Ethiopian grocery stores. Bezu also commented on the popularity of injera saying, “you can find it in gas stations and in 7-eleven.”[9] Rhoda Worku described injera as “a spongy bread…it looks like pancake.”[10] Worku originally did not make injera in her restaurant but her customers begged her to make it so she did. Afomia Wendemagegon also discussed injera and the different dishes it is served with such as kitfo a “ground meat, fried a little bit, with some spices on it. And you eat it with injera.”[11]

Ethiopian foods, such as doro wat and injera help migrants connect to their native country. In addition, cooking these foods also provides a means of maintaining cultural heritage as generations are educated in Ethiopian cuisine. 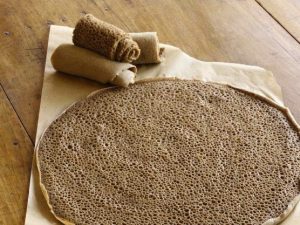 Injera as an eating utensil [16]