One migrant community in the United States who not many people think of as migrants are the English.  Their help in colonizing and founding colonies in North America has made their continued migration over the centuries nearly imperceptible. To understand these invisible immigrants, I used the 1860 U.S. Census to investigate a family of English immigrants and observe how they integrated into their new home. One such family were the Bells. Robert and Mary Greenhalgh Bell, both English immigrants, were wedded and had their first child by the winter of 1832.  They had nine children total.[1] Also included in the Bell family was Robert’s 90-year-old mother, Elizabeth Bell, who migrated from England and lived as a dependent of Robert.[2] This structure gives us an idea of how the households of English migrants would have been organized–a couple who either married in England or the U.S. and created a household, that included possible three generations and extended kin.

The patriarch of the family, Robert Bell Sr., seemed to have integrated quite thoroughly, participating in many facets of American life such as business, church, community, and politics. Robert was deeply involved in his community.  He acted as a member of the vestry and the superintendent for the preschool at St. Paul’s Episcopal Church in Alexandria.[3] Robert was also an active voter who participated in elections, both national and local.[4] This community and political activity illustrates how some English immigrants quickly found their own niche in American society. 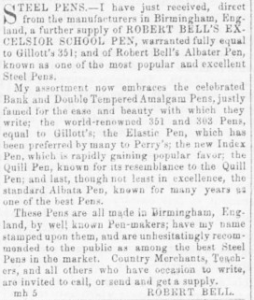 Advertisements for Robert Bell’s stationary store circa March 14, 1860 (courtesy of the Library of Virginia, retrieved at http://virginiachronicle.com/cgi-bin/virginia?a=d&d=AG18600314.1.1)

As a businessman, Robert was a successful bookseller and stationer, being one of the city’s prominent merchants of books and educational supplies since the early 1840’s.[5] As an English migrant, Robert sold many of his items in advertisements using British provenances, such as “EXCELSIOR SCHOOL PENS” manufactured in Birmingham and religious lectures from Liverpool.[6] At the time of the 1860 U.S. Census, Robert’s wealth was recorded as $22,000, a very handsome sum for the time and is an indicator that–at least this English immigrant–found little trouble in adapting to his new surroundings.[7]

Another member of the Bell family who played an active role in the community was Robert’s son, Robert Jr. Robert Bell Jr., a first generation American, followed his father in many ways, voting for the same candidate, taking the same profession, and going to the same church as his father.[8] One area in which Robert Jr. and his father differ was the ownership of slaves. According to the census, Robert Bell Jr. owned a female mulatto slave. It is not clear whether Robert Bell Sr. did not own sells because he disagreed with the practice or that he felt that he could not afford one.

[3] Harold W. Hurst, Alexandria on the Potomac: The Portrait of an Antebellum Community (Lanham, MD:University Press of America 1991), 76.