One of the articles that we looked at, “Simmering Gang Feud Erupted in Va. Teen’s Slaying,” got my attention, because it not only alludes to issues of gang violence, but also criminal activity and city resources.

The article reports on the murder of Salvadoran teen, Kelvin Alvarez, who was shot outside his residence in late January 1990. Alvarez arrived in the United States in 1979 from San Miguel at the age of 8 years old, and he quickly made friends at school and learned English by hanging out out with his new friends.[1] Kelvin, like other immigrant children, was the “intermediary” for his parents and helped them adapt to American cultural norms.[2]

By the time he got to high school at T.C. Williams, Alvarez had become the “undisputed best fighter” of the group, “La Mara de Chirilagua.”[3] “La Mara” was Salvadoran slang for “the group,” and Alvarez was probably drawn to the group not only because it was based close to where he lived but also it consisted of people close to his age who fled the Civil War in El Salvador that began in 1979. However, “La Mara de Chirilagua” was not a gang in the traditional sense (one that often gets involved in criminal activities). Instead, “La Mara de Chirilagua” was a group of Salvadoran youths from the Arlandria area who came from the same city, and the group’s main function was to “hang around together and stick up for each other.”[4] While Alvarez did not originate from Chirilagua in El Salvador, he must have identified with the other teens.

Alvarez’s death in late January 1990 struck a chord with the T.C. Williams High School community. School officials at T.C. Williams described Alvarez as a “solid student with no history of serious disciplinary problems.” [5] History teacher, Marshall Cook, recalled that Alvarez was on track for a “regular, normal, average-citizen-type life” and who knew how to get along with people from various ethnic backgrounds.  He also thought that Alvarez was “street-smart,” but in a “good way.” [6] This comment is interesting in a couple of ways. First of all, describing Alvarez as “street-smart” potentially associates him with gangs like La Mara de Chirilagua. The phrase, “in a good way,” speaks to Alvarez’s ability to adapt to American cultural norms while maintaining his own ethnic identity. 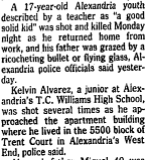 An interesting feature of the Alvarez case was that the investigation itself was challenging for police because of “language barriers and bad information.” [7] These challenges point to the struggles that the City of Alexandria as a whole had to deal with as its demographics shifted. Another interesting feature about the Alvarez case was that police in Alexandria misled reporters about the case’s progress, saying that there were no developments in the case. However, a twenty-one year old man, Jaime Ernesto Mira-Lopez, and another sixteen year old were arrested about a week after Alvarez died and were charged with murder.[8] The media criticized the police for withholding information, as papers documenting Lopez’s arrest were discovered by a reporter covering the case. [9]

Alvarez’s death highlights the realities that some refugee children unfortunately face. While they may adapt to their adopted country’s cultural norms, they are not immune to socioeconomic conditions that drive some to get involved in gang violence, drugs, or other activities. Even if refugee children are able to perform well within the American educational system, they still have to face language and other cultural barriers.