Greek immigrants came to the U.S. for a variety of reasons, from economic opportunities to escaping political persecution and fleeing war. Once in the U.S., they took advantage of the opportunities available to them, especially in the food service industry, to make better lives for themselves and their families.[1] Some Greeks, mainly single men, lived on their own and sent remittances home to support their families who were still in Europe. One example was Gus Kyriacos.

Gus Kyriacos settled in Alexandria, Virginia by the time the 1940 U.S. Census was conducted. He was recorded as living on 109 North Royal Street (Ward 2). Kyriacos does not show up anywhere in the 1920 U.S. Census, which suggests that he most likely entered the United States after 1920. The 1940 U.S. Census lists Kyriacos’s birthplace as Cyprus off the coast of Greece. Why he left Cyprus is unclear, but perhaps it had to do with escalating political tensions or economic turmoil that characterized the late 1920s and 1930s while Cyprus was under British rule. The 1940 U.S. Census notes that Kyriacos had lived at the same residence since 1935.

Kyriacos operated a café near where he lived in Alexandria. The café’s name is not listed in the census, but it may have been the Royal Restaurant (then known as the Royal Café) in what is now North Old Town.[2] This eatery had existed for about 110 years, so it is possible that Kyriacos bought the restaurant from a previous owner prior to 1940.[3] What is even more interesting is that the original address of the Royal Café was 109 North Royal Street, the same address that Kyriacos was recorded to be living at in the 1940 U.S. Census.[4] The original Royal Café was torn down in 1964 to make room for urban renewal projects that were going on in Alexandria at the time, but then owners, Richard Kyriacos and his nephew Charles Euripedes, moved to its current location today. [5] What relationship existed between Gus and Richard is unknown, but it seems that Gus passed ownership of the restaurant to Richard. 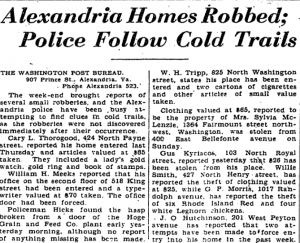 As early as 1931, Gus had clearly established himself in Alexandria, and would eventual become part of the common practice Greek immigrants–even those from Cyprus–who work at and own restaurants.