For many Ethiopians, the decision to leave Ethiopia can be an incredibly emotional process. Many left, not because they wanted to, but because their lives were in danger during the country’s civil war. The adjustment to living in the United States was difficult for many due to its different language and customs. Immigrants handled this transition in a number of different ways. Some rigorously held onto their home country, doing their best to maintain their traditions in a new place. Others threw themselves into their new host countries and adopt a new culture and way of life. However, many immigrants chose to adopt coethnic approach – focusing on the merging of both cultures – and choosing to take the best of both and pass those values on to their children.[1] One common aspect that is central to immigrants and culture, whether they are in their home or host country, is food. Food has the ability to remind people of where they came from, but also can help them connect to their new home. But, perhaps most importantly, food can also help to bring people together.

Once settling in the United States, many immigrants strived to feel a connection to their home country, and food maintained that connection. In oral histories with Ethiopians immigrants in Alexandria, traditional foods were central, and this can be most clearly seen around the major holidays. Alexandria’s Ethiopian immigrant population is largely Orthodox Christian, and one of the most important holidays is Christmas, known as Genna. Afomia Wendemagegn and her family immigrated to the United Stats when Wendemagegn was just a little girl. While Wendemagegn does not remember much about what Ethiopia was like, she has fond memories of Christmas traditions, particularly the dishes that were always eaten. The main dish she loves is doro wot, which is a “stew made with like chicken with like hard-boiled eggs in it and it’s really spicy.” She adds that the levels of spice can be change so that it is less spicy, however her family loves it hot. Wendemagegn loves this dish so much that even though she is now a vegetarian, but she makes an exception every year for doro wot.[2] 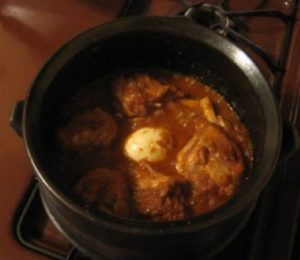 While food can help immigrants stay connected to their home countries, food can also help immigrants adjust and feel at home in the United States. For many immigrants, the new food is a drastic culinary change. FAmerican cuisine is viewed as unhealthy and artificial, but despite this, many immigrants find themselves drawn to it. One example can be found in the oral history given by Aida Abdul-Wali. She was born in the Ethiopian capital city of Addis Ababa, but when she was eight, Abdul-Wali and her family were forced to flee after a violent military coup in 1974. After going to Yemen, her family went to Egypt, before finally settling in the United States. While Abdul-Wali does miss the food of Ethiopia, she has come to love some American foods, most of which are junk foods. She states specifically that she really like “McDonald’s… Honey Buns and Twinkies and stuff… Diet Coke.” Abdul-Wali really came to love the food in the United States, and even joked that they were her friends in her high school. Later, in her interview, Abdul-Wali is asked to give advice to new immigrants and her best advice is “just really assimilate with the culture” and it is clear that Abdul-Wali did just that when experiencing part of a new country’s diet.[3]

One example of the blending of cultures through food can be seen in the Caboose Café run by Rhoda Worku. Worku immigrated to the United States in the early 1980s and settled in Alexandria, Virginia. She opened her café in 2004 in the Del Ray Neighborhood. Her restaurant is famous in Alexandria for being a family friendly café, offering a unique blend of American and traditional Ethiopian dishes. When she initially opened her restaurant, Worku only served American foods, such as sandwiches, salads, omelets, and waffles. After opening, she was encourage by friends to serve traditional Ethiopian food as well. This started when a group of yoga students from the yoga studio down the street asked her for some vegetarian dishes.[4] One Ethiopian dish featured at the Caboose Café is zilzil tibbs, which is steak with onions, tomato and berbere served with cabbage and salad.[5] This dish is often served with a type of Ethiopian bread called injera, which is a spongy flat bread. It is often typically eaten with one’s hands, instead of with utensils.

Under the dinner section of her menu, there is an Ethiopian section that describes the dishes and also contains a handy English-Ethiopian dictionary that helps to translate both foods, and some basic Ethiopian foods. This dictionary also helps to illustrate a desire to educate the local Del Ray community about Ethiopia. Another way that Worku tries to help Americans experience Ethiopian culture, is by serving Ethiopian food only at dinner. This is because in Ethiopia eating a meal is a leisurely activity and is something that should be enjoyed and experienced.[6]

Adjusting to a new host country can be a difficult process for an immigrant. They are faced with many difficulties, such as learning a new culture and language and set of social norms. While many immigrants want to adjust to a new country, they want to make sure that they remain a sense of their old life. For many Ethiopians immigrants, food is central to how they can both still maintain a sense of connection to their home country while also helping them to become accustom to a new place. However, perhaps the most important thing that food can do is to build a bridge between home and host country and offer a chance to feel connected to both places.