Ethiopia’s immigration patterns have been greatly affected by political and economic struggles. According to Professor Solomon Addis Getabun of the University of Central Michigan, “The majority of the African refugees of the past decade have come from the Horn of Africa, an area that has been in permanent emergency for decades.” Ethiopia has accounted for 1,743,800 of these refugees, mostly caused by the misfortune of the Red Terror.[i] 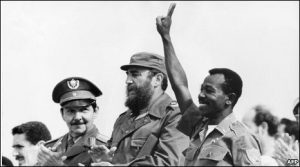 An article from the Washington Post from June 1982 cited a skyrocketing rate of 1,457 Ethiopians applying for asylum in the United States. The first wave of the Ethiopian exiles in the United states arrived in 1974, following an increase in violence related to the Marxist takeover and assassination of Haile Selaisse. United States government policy shifted in reaction to the violence, allowing more Ethiopians to apply and become approved for asylum in the early 1980s.[ii]

Between 1976 and 1978, the Marxist government of Ethiopia executed as many as 500,000 citizens in a conflict called the Red Terror. The Marxist government abolished the parliament, suspended the constitution and arrested the emperor, who died in custody.[iii]  Just as so many Ethiopians escaped Ethiopia to the sound of gunfire, so did Aida Abdul-Wali. In a 2015 interview with Apasrin Suvanasai, Abdul-Wali discusses leaving Ethiopia and arriving Alexandria, Virginia around 1980.[iv] Abdul-Wali recalled: the Red Terror: “What I remember from that is it was a peaceful time, and the next thing you know, it was like a military takeover. And I remember one day—like the next day, there were just like bodies outside, like we’d never seen it before. But it was just like literally blood coming down the hill because they had just taken and killed so many people.”[v]

For some families at the time, the Marxist government takeover was a dangerous time. The Abdul-Wali family, like many others, attempted to leave Ethiopia in reaction to these events.  And–many settled in the Washington Metropolitan Area, especially Alexandria, Virginia.