Two images of Ethiopians in Shammas 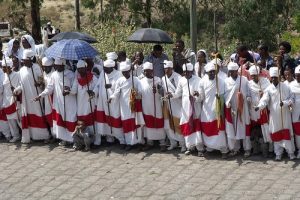 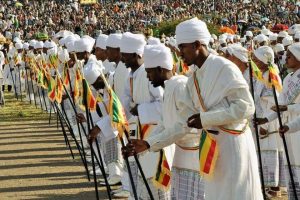 Ethiopians continue these traditions in the Washington Metropolitan area to bring Ethiopians in the area together and to celebrate an important holiday. Rhoda Worku, an Ethiopian asylum seeker who came to the United States in 1980, sat down with Krystyn Moon (the interviewer) for a city project, Immigrant Alexandria: Past, Present and Future in Alexandria, Virginia. In her 2015 interview, Worku talks about how important the holiday is to her and her family. In her interview, she talks about how she celebrates January 7th, and how Ethiopians follow the Greek Orthodox calendar.[2] Afomia Wendemagegn, another Ethiopian immigrant interviewed by Moon describes Genna as her favorite holiday and compares Christmas in America to Christmas in Ethiopia. Wendemagegn stated that Ethiopians do not give gifts like American’s but celebrate the holiday with their loved ones.[3] Doro wat was described by both Worku and Wendemagegn as a dish made for the Ethiopian Christmas. Wendemagegn described doro wot as “a stew made with chicken with the hard-boiled eggs in it and it’s really spicy. I mean you can change like the use of spiciness, but we like it hot.” Although Wendemagegn said that doro wat can be made at any time, it is one dish many Ethiopians eat on Christmas. [4]

From the evidence based on the two interviews with Rhoda Worku and Afomia Wendemagegn, we can see how important Christmas is to Ethiopians. Not only have some of Ethiopian immigrants had to escape war, but they are now citizens in a country extremely different than what the one they are accustomed to. Holidays are a way for Ethiopians to gather and celebrate an important day within the Ethiopian Orthodox Church and maintain connections to their heritage. Ethiopians do not give presents like Americans do and instead focus on spending time with their loved ones and enjoying the company of the people surrounding them. Holidays and the foods associated with them are incredibly important in different cultures, and is the middle-ground for bringing new people together across cultures. The arrival of Ethiopians in the Washington metropolitan area has also led to opportunities where food and festivals are celebrated with non-Ethiopians too.