The prevailing image of immigrants to the United States in the 19th-century has often been one of people fleeing poverty and tyranny in Europe and seeking opportunity in the U.S. After studying detailed U.S. census data, English immigrant James Green of Alexandria, Virginia emerged as someone I wanted to investigate further. Green’s wealth and property made him an outlier among his fellow English immigrants, many of whom wanted to buy land and pursue farming in the Midwest.  They were not poor, but did not have the assets that Green had. 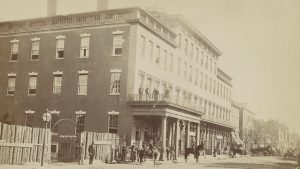 James Green was born in the city of Sheffield in southern Yorkshire, England to William and Mary Green on November 24, 1801.  We know nothing about his childhood or how he came to reside in the United States.  In 1823, he appears in the City of Alexandria according to records on Ancestry.com at the age of 22. Soon, he married Jane Muir on November 21, 1825 in the District of Columbia. Presumably, the Green’s were a hard working, close-knit, family consisting of James and Jane along with nine children (their daughter Alice Green died on March 17, 1860, at the age of fourteen).[1]

In 1847, James Green purchased three-quarters of an acre from the estate of a Scottish merchant, John Carlyle, sold by his heirs after his death. Green completed the sale with the purchase of the actual Carlyle home in 1848, converting it to the Mansion House Hotel, one of the largest and most luxurious hotels on the East Coast. In consulting Charlotte Erickson’s Invisible Immigrants, Green fits the last of the three groups that she analyzes–professionals and artisans.[2] Union troops occupied the City of Alexandria in May of 1861 and took possession of the Green’s hotel for a hospital, evicting the family by November.[3] The Union Army  offered him a sizable rent for his property, but only if Green agreed to take the Oath of Allegiance to pledge his loyalty to the Union.[4] Green never appears on the loyalty oath list and to date the rent remains unpaid. [5]

Don Debat’s website, Voting Viva Voce, shows that prior to Union occupation the hotel was teeming with energy. In addition to the family members, there were a number of borders, domestic servants, and slaves housed there. Slave schedules provided by ancestry.com confirm Green owned one slave and fifteen others were rented by him to do the work of the hotel. [6]

The marriage of James and Jane lasted 54 years until her passing on March of 1880.  James died six months thereafter. The two rest peacefully together in Ivy Hill Cemetery in Alexandria, Virginia. 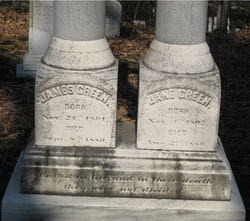 Researching English immigration has expanded the narrative away from the one-size fits all model that is often viewed through the lens of American exceptionalism. In the case of English immigrants, they were looking to improve their economic situation by coming to the United States as opposed to fleeing tyranny or poverty.