In the 1970s and 1980s, Vietnamese refugees had to take jobs that did not correlate to their previous qualifications or education in Vietnam. This meant that, instead of working as doctors and lawyer in the United States, many refugees turned to the food industry and other job sectors that did not require English language fluency and certain credentials.

This situation also led to the establishment of the Washington Metropolitan region’s first Vietnamese restaurants.  Most native-born Americans did not understand Vietnamese cuisine, or had limited knowledge because of their military service in Southeast Asia.  Restaurant reviewers, especially in the Washington Post, struggled to understand the cuisine.  As a result, reviews of Vietnamese restaurants were both positive and negative in ways that play to native-born tastes.

For example, reporters commented on the décor of the restaurant and how it was not a “typical” style for an Asian (meaning Chinese) restaurant. 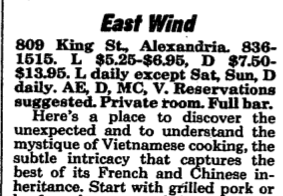 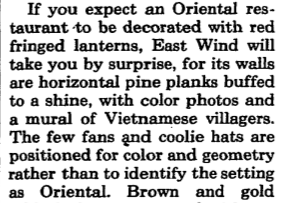 In Alexandria, East Wind reviews contained language that highlighted the exoticism of Vietnamese food traditions. It is described as, a “place to discover the unexpected.”[i] Also in 1981, The Washington Post review focused on the atmosphere of East Wind, almost as if to prepare customers that they would be experiencing something completely foreign. Reviewers prepared diners to expect different types of foods and designated quality of it. Out of all of the Vietnamese restaurants in Alexandria during the 1980s, East Wind had to most critical reviews and was only recommended because it had such a diverse menu of food. 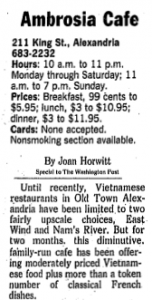 This review for the Ambrosia Café written in 1989, carried an overall condescending tone. Joan Horwitt called the Ambrosia Café “diminutive,” but reminded diners that there were also French dishes to balance it out. Many native-born Americans did not want Vietnamese food, and instead wanted upscale French or Chinese cuisine.  Reviewers also emphasized the connection between Vietnamese food ways and those of China and France.[ii] 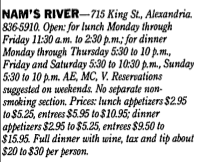 Nam’s River was one of the more expensive Vietnamese restaurants and served mostly French style, Vietnamese dishes.[iii] The common trend for reviews of a Vietnamese restaurant was to explain how the food was different than what the average American ate. Phyliss Richman, food critic of the Washington Post, wrote “[a]nd since no bread is served (The style is, after all, Asian).” It was as if people had to be prepared to enjoy food from other countries.

Where Nam’s River once was located is now The Lighthorse, an American restaurant. East Wind is the only restaurant where its location has maintained connection to Asian cuisine. Where East Wind was located, there now stands an Asian Bistro.[iv] The Ambrosia Café also no longer exists on King Street and instead, multiple shops reside in its previous location.