Dat Luu and Hanh Phung were the owners and proprietors of the Ambrosia Café at 211 King Street in Alexandria, Virginia. They were originally from Michigan, where they had settled some time in the early 1980s, before moving to Alexandria with their family and opening a restaurant.  Reportedly, they were educated in French schools in Saigon, and Luu had earned a PhD in French while Phung had a master’s degree in education.  Neither of them used their degrees in the United States, however, and both of them went into the restaurant industry.  Their restaurant, perhaps tied to their own backgrounds, served a combination of French and Vietnamese dishes to a majority non-Vietnamese population in Alexandria.[1]

After reading a review of their restaurant, I wanted to learn more about them.  Searching both individuals in the Washington Post database at the library, the couple appears in the Washington Post several times. Hanh Phung did not appear in any Washington Post newspaper coverage aside from the 1989 review of Ambrosia Café by Joan Horwitt. However, while looking into Dat Luu and the Ambrosia Café, I found information in an interesting spot. Luu came up three separate times under announcements for Architectural Review Board meetings.

Luu’s first appearance in the section on the Architectural Review Board–a group of appointed officials who approve alterations to historic buildings or to buildings located in the historic district–was his petition to add a sign, “20-by-30 inch, wood sign that [would have] read ‘Ambrosia Café” to the front of his building.[2] The restaurant was located in the historic district known as Old Town, so any changes, even as small as adding a sign, had to be passed through the Board. Luu’s request was approved in April 1989.

In September of the same year, Luu had yet another approval of a new sign to be placed in front of the business. This time in was “an 18-by-24 inch aluminum sign reading ‘Saigon Restaurant’.”[3] It is likely that Luu changed the name in an attempt to attract more customers, appealing or at least making people quickly recognize that it was a Vietnamese restaurant.

Luu’s restaurant went through yet another sign in November 1990. Both made of wood and very similar in size, but it now said ‘Saigon Restaurant, Today’s Specials.’”[4] 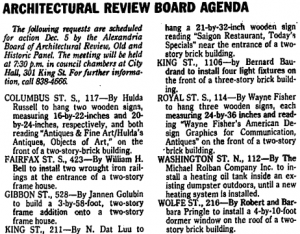 From the Washington Post articles about Dat Luu’s restaurant’s signs, we can determine changes in the family’s business. The biggest factor was that the name changed. However, it is unclear of why. More then likely this name change happened in an effort to more strongly define the restaurant as Vietnamese, and attract more customers.

Interestingly, the space that once held Dat Luu and Hanh Phung’s restaurant in the early 1990s is now a Japanese sushi restaurant, continuing the trend of Asian restaurants inside the space. 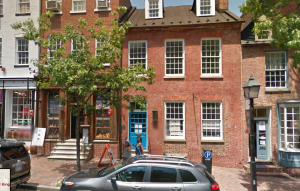