After our discussion this week, I became very interested in the Beth El Hebrew Congregation. I was curious about its establishment, their involvement in the Alexandria community, and their role in creating the Home of Peace Cemetery. The cemetery is one of the earliest Jewish cemeteries in Virginia. Its founding is the result of the establishment of the Hebrew Benevolent Society in 1857 to establish a proper burial ground for the members of the Beth El Hebrew Congregation. Most of the Jewish community’s wealthiest and most prominent families were buried in Home of Peace, including members of the Strauss, Bendheim and Dreifus families whom we discussed in class.

German Jewish immigrants had been arriving and settling in Alexandria since the 1830s, and by 1856 more than 30 Jews were residents of Alexandria. Despite the early establishment of Home of Peace, it was not until 1871 that the Beth El Congregation decided to find a permanent place of worship and establish a religious school for the 20 or so families that made up the congregation (NOTE: it was considered a “family congregation” from 1883 to 1938). Beth El was a reformed congregation, and starting in 1871, sermons were delivered in English. Beth El, like congregations in Charleston, Richmond, and Savannah, practiced what became known as American Reform Judaism. English during sermons, the use of pews, the desegregation of the sexes, and the use of organs during service were some of the ways Jews, especially in the South, attempted to change their services to appeal to younger and more acculturated members. The reforms were also in response to the tension fueled by nativism, and a general resentment that non-Jewish Southerners felt after after the Civil War.  Jewish communities continually tried to prove their patriotism to the South, and appear more “American” by supporting Southern causes and reforming one of  the few things that made them stand out: their faith.[1]

The congregation had been an active member of the Alexandria community since its start. Most of the earliest members of the congregation were participants in the business community, working mostly in retail trade, including dry goods, clothing, shoes, groceries, and scrap. In my research on Beth El, I found an article from Alexandria Gazette that reported on their Yom Kippur celebration in 1863.[2] 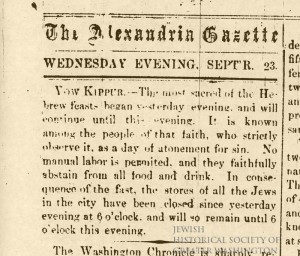 The article talks about the celebration, and mentions that the shops and businesses owned by the Jewish community would be closed for the holiday. This shows how much of an important part German-Jewish businesses played in Alexandria. So I did a little more digging using the Chronicling America site, and found another announcement from the Alexandria Gazette similar to the Yom Kippur article, only this time about the Hebrew New Year. [3] Similarly, it also talks about shops being closed for the holiday, both those of the reformed and orthodox faith. It also provides a little information on the holiday and its practices, like the announcement for Yom Kippur. Hebrew New Year is also known as Rosh Hashanah, which occurs ten days before Yom Kippur. They are a part of a series of Jewish holidays known as “Yamim Noraim” or the “Days of Awe.” The two holidays are the “High Holy Days” in Jewish religion.[4]

Beth El was such an active participant of the Alexandria community that it was necessary to report on their holidays and events because they were of interest to everyone else. Despite the very small size of the congregation, their businesses were of great importance to the rest of Alexandria because they supplied the community with so many goods and services. Knowing when Jewish holidays were was essential for the community so they would know what days to shop.