According to Donna R. Gabaccia in Italy’s Many Diasporas (2000), “millions of laborers migrat[ed] in an out of Italy between 1870 and 1940.”[i] The vast majority of these Italian migrants were men who sought employment in the myriad of unskilled labor positions that became available as foreign nations industrialized. Many Italians specifically came to the U.S. in the late-nineteenth century in order to fill the jobs that had been recently abandoned by emancipated slaves, and other labor positions within factories, mines, and railroads.[ii]

Antonio Pulzone was one of the four-million Italians that Gabaccia estimates to have migrated from Italy between 1896 and 1905.[iii] Pulzone was born to Angelo Pulzone and Rose Walla on April 25, 1887, in Montepagano, Italy.[iv] According to the S.S. Balilla’s passenger manifest, Pulzone last resided in Bellini, Italy, before he arrived in New York City on May 8, 1901.[v] The manifest also reflects that Pulzone was a laborer, paid for the trip across the Atlantic Ocean himself, possessed just five dollars, could read and write, had not previously been to the U.S, had never been in prison, was in good physical health, and that he came to the U.S. to join his brother-in-law in an unnamed city in New Jersey.[vi] Based on this information, Pulzone matched Gabaccia’s profile of a typical Italian immigrant who went to a foreign country for employment purposes and lived with already-established relatives or friends.

Records indicate that as early as 1914, Pulzone had become a resident of Alexandria, Virginia. According to an article in the Alexandria Gazette on September 2, 1914, “William A. McGreen et al ha[d] sold to Antone Pulzone a lot at the northeast corner of Madison and Columbus streets.”[vii] Two days later, a subsequent article appeared in the Washington Herald, and specified that the property purchased by Pulzone was part of John W. Green’s estate sale and included four building lots.[viii] Though the amount that Pulzone paid for the property was not disclosed in these articles, this information demonstrates that Pulzone was able to save up enough money while in the U.S. in order to obtain a mortgage, or purchase outright, the four lots in Alexandria. Additionally, after comparing the Sanborn Maps from 1912 and 1921, it is quite possible that these four building lots were vacant and without structures at the time of Pulzone’s purchase.[ix] Therefore, assuming that this inference is correct, it is equally impressive that Pulzone was able to afford the additional costs of new construction on top of the purchase price of the four lots.

The 1912 and 1921 maps are juxtaposed to show the differences in structures found within the lots that were purchased by Pulzone in 1914. Click on the middle cursor and drag from left to right to see these differences. (Maps courtesy of ProQuest, LLC. Juxtapose created by Dino Reschke using JuxtaposeJS, which is available through the Northwestern University Knight Lab).

Meanwhile, city directories over the next quarter-century disclosed that Pulzone was employed as a mechanic in the booming railroad industry.[x] Pulzone was listed as a car repairman for several different railroad companies, including Armour Car Lines, Fruit Growers Express, and the Richmond, Fredericksburg, and Potomac Railroad.[xi] According to a 2009 article by the Alexandria Times, Fruit Growers Express “constructed and repaired refrigerated railroad cars … [it] was formed as a separate company in 1920 after the federal government ordered Armour and Company to sell its fruit-shipping subsidiary following an anti-trust decision.”[xii] Based on these facts, it is likely that Pulzone continued to work in the same position and location even though his employer’s name changed as a result of government intervention and changes in company ownership. 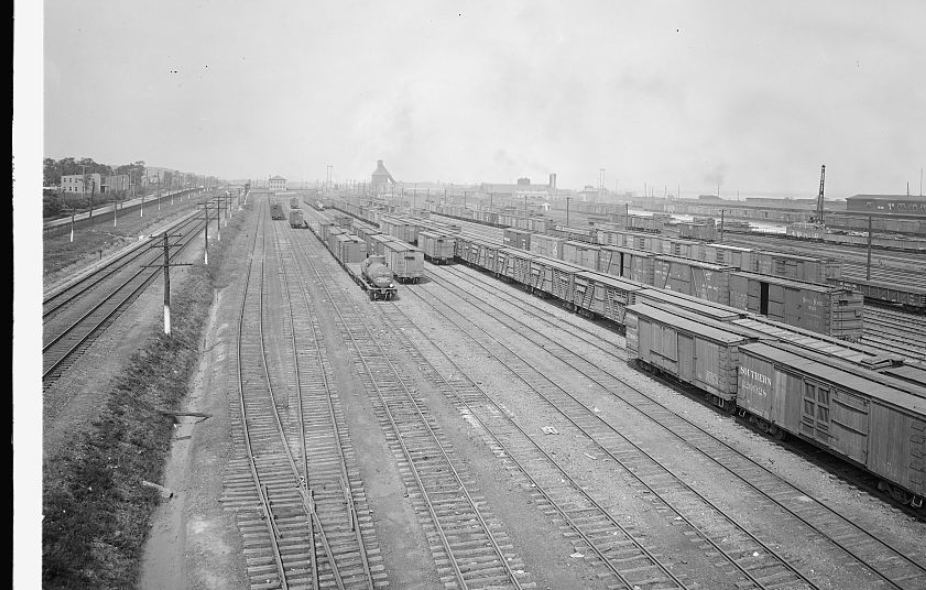 Potomac Yards, 1916
(Image courtesy of the Library of Congress)

An assortment of documents reveals that Pulzone made Alexandria his permanent home. Pulzone married Alexandria-native Effie Ellen Simms on April 6, 1916, in Elkton, Maryland.[xiii] The 1920 U.S. Census reported that Pulzone and Effie owned their residence at 807 North Columbus Street, located in Ward 3 of Alexandria.[xiv] The 1920 U.S. Census also recorded that Pulzone worked nearby as a mechanic at Potomac Yards, that his citizenship status was “unknown,” that Effie was unemployed, and that they had an infant daughter, Carlie.[xv] The 1920 U.S. Census was the only U.S. Census in which Pulzone’s name appeared; however, city directories confirmed that he stayed in the Alexandria area because his various home addresses were 211 West Peyton Avenue (Del Ray) in 1934, r827 North Columbus Street in 1938, and r807 North Columbus Street in 1940.[xvi] The 1930 U.S. Census did not list Pulzone as residing in the same home as Effie, but “Coralie” (11) and another daughter, Francis (7), appeared under Effie’s name.[xvii] Though Effie was still unemployed, she was recorded as having owned her home, which was valued at $2,500. Both Pulzone and Effie were absent from the 1940 U.S. Census.[xviii] Based on the abstract of divorce decree from November 11, 1947, which listed the cause of divorce as “desertion,” it is likely that Pulzone and Effie had an estranged marriage for quite some time and he had left the family.[xix] 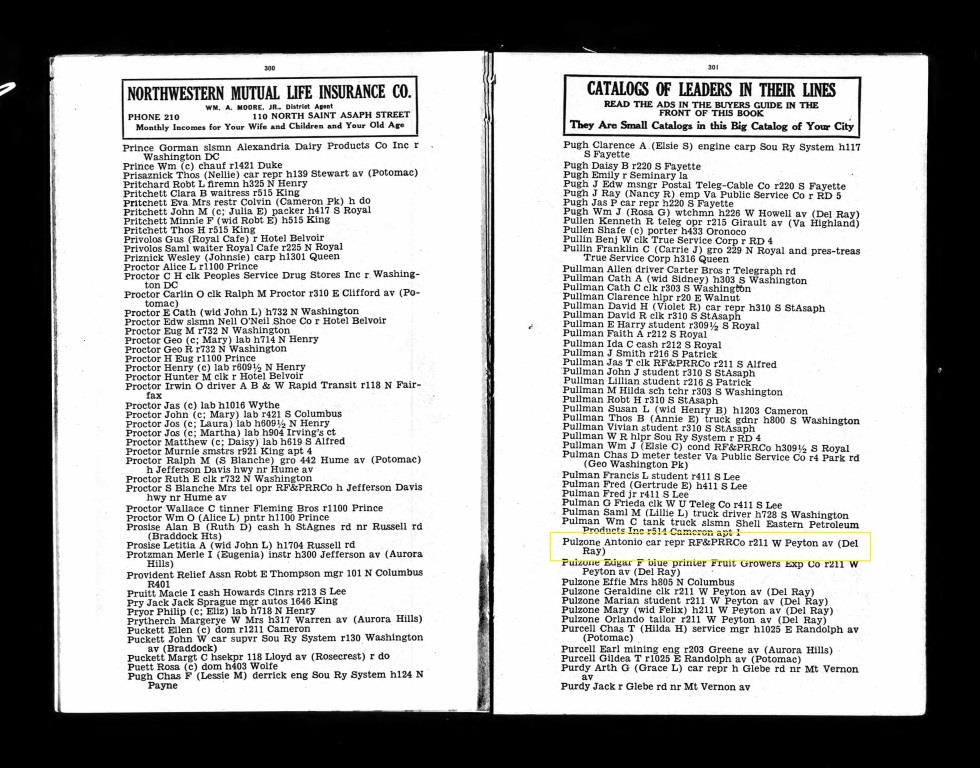 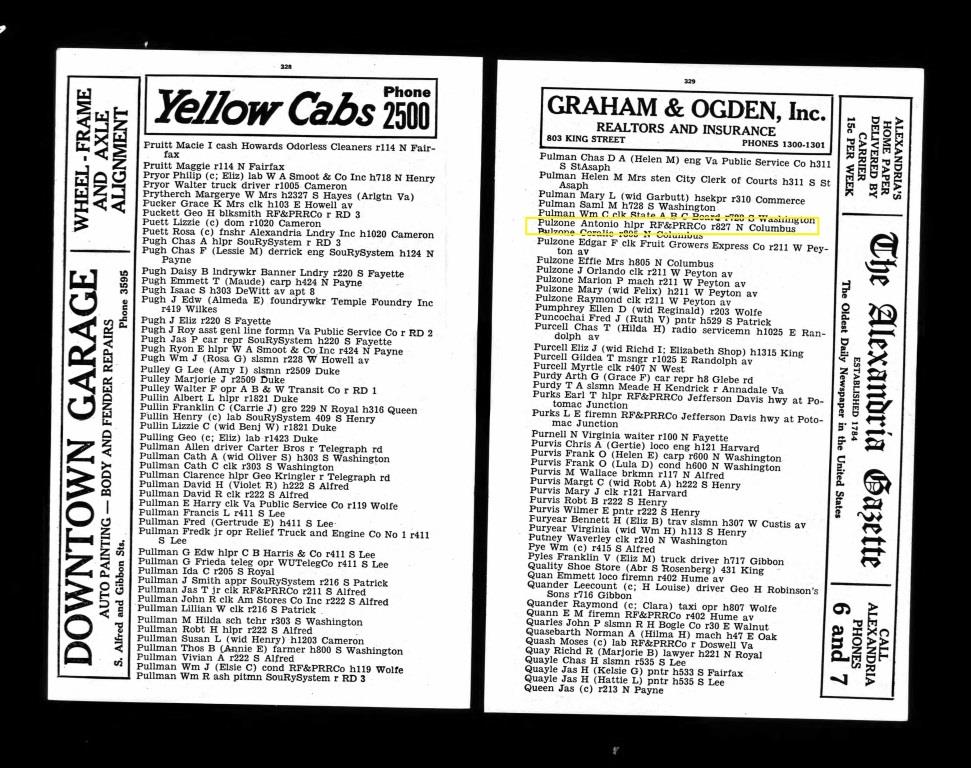 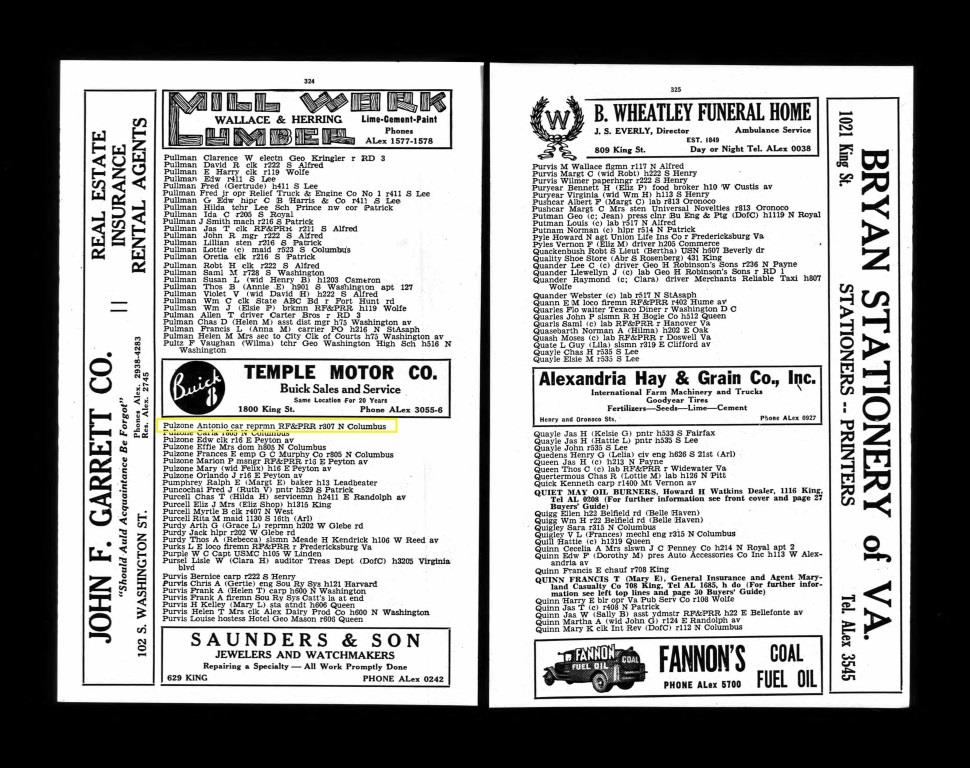 Interestingly, though Pulzone was not an American citizen, he participated in both U.S. World War drafts. Pulzone’s World War I draft card from June 5, 1917, reflected that his citizenship status was “alien” and that he was 30 years old, short with a medium build, had brown eyes and black hair, and was not bald.[xx] He lived at 832 North Washington Street in Alexandria, VA, was employed as a car repairman at Armour and Company, and married with only his wife to support.[xxi] On July 17, 1917, the Washington Herald featured the article “Alexandria’s Quota of 153 Names Drawn: Government Lotter Tells Men of Selection for National Army,” which identified Pulzone by his draft number of 1323.[xxii] Pulzone’s name and draft number is also contained in the Alexandria Library’s online transcription of the World War I draft registrations for northern Virginia.[xxiii] Additionally, records show that on April 27, 1942, Pulzone registered for the World War II draft.[xxiv] According to his draft card, he was 55 years old, white, 5 feet 2 inches tall, had brown eyes, no hair, his complexion was “ruddy,” and he had a scar on his forehead.[xxv] He provided his Alexandria address of 805 North Columbus Street and Effie’s name as a person who would always know his address.[xxvi] Notwithstanding these aforementioned sources, there is no readily available evidence that Pulzone ever actually served in the Army or in either World War. 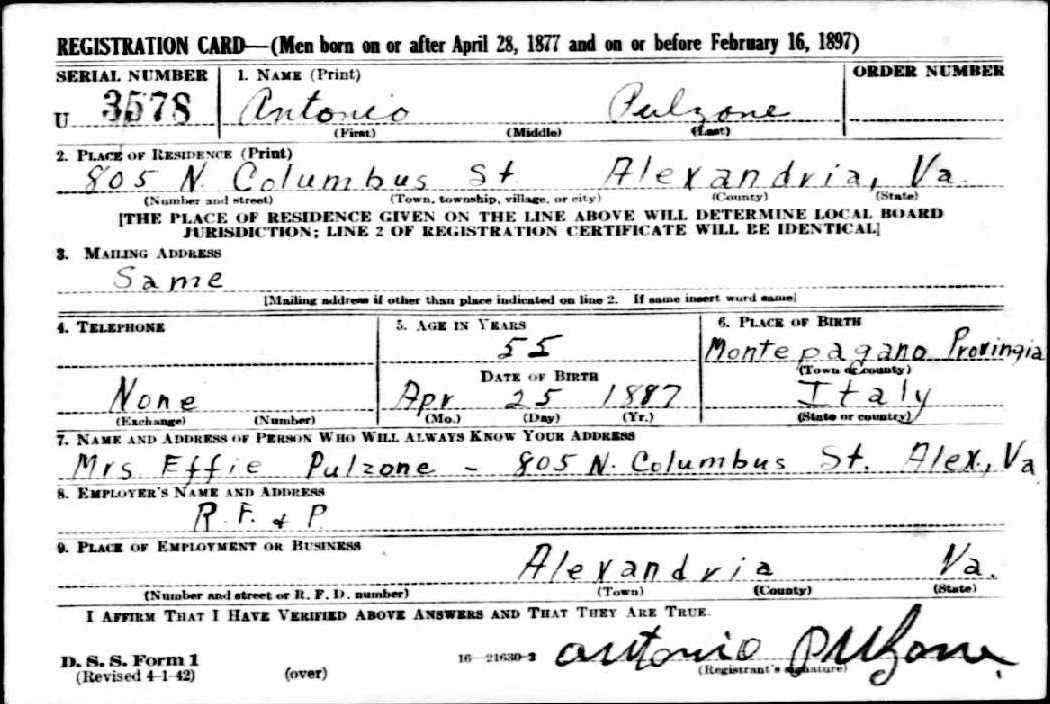 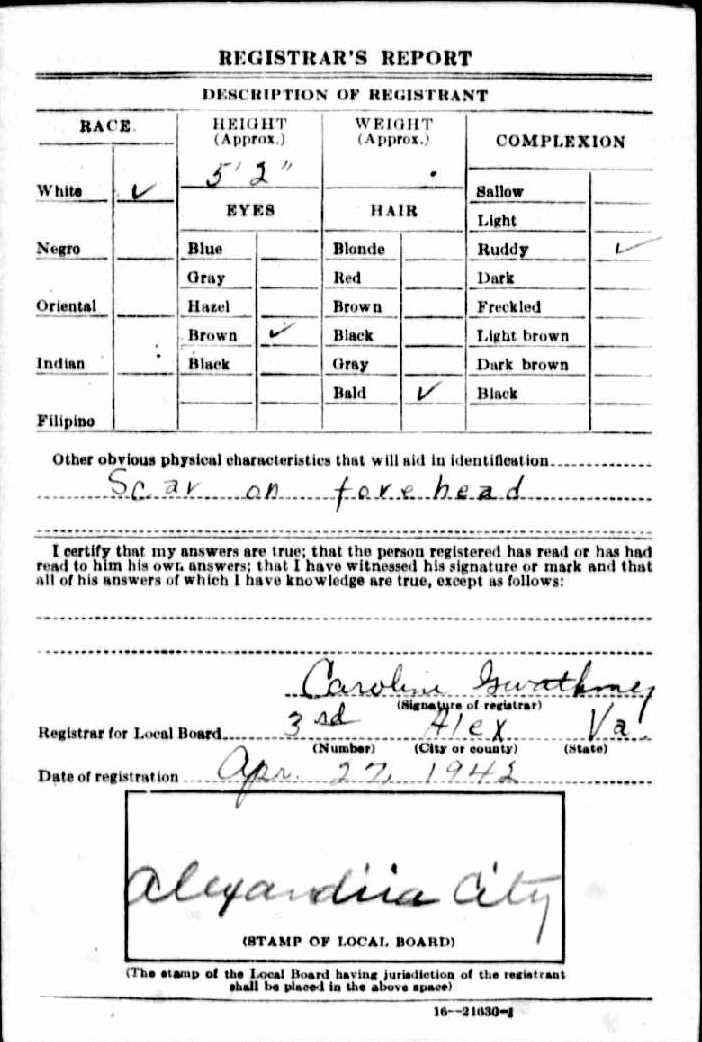 Pulzone was the antithesis of an Italian immigrant from this time period. While the majority of Italians who immigrated to the U.S. either returned to Italy or permanently resided in the U.S. and applied for U.S. citizenship, records indicate that Pulzone stayed in Alexandria for the remainder of his life but never submitted an official petition to become a U.S. citizen.[xxvii] Indeed, according to their certificates of death, both Pulzone and Effie died in Alexandria.[xxviii] Effie died from breast cancer on March 27, 1952, and Pulzone died from pneumonia on June 12, 1969.[xxix] Both were buried in separate lots in Ivy Hill Cemetery in Alexandria.[xxx]

[vi] Ibid. The name of Pulzone’s brother-in-law is listed on the manifest, but it is illegible, and the city in New Jersey was not provided.

[viii] “Site Selected for Alexandria Hospital: Building to be Erected on Square Bounded by Columbus, Alfred, and Wythe Streets; Will Collect All Pledges,” Washington Herald, September 4, 1914, 8.