As German-Jewish Immigrants began to enter into the United States, they soon realized they had to carefully navigate religious and racial attitudes that were distinct from their homelands. Racial lines were sharply divided, especially in the American South.[1] With such strict lines drawn between whites and African Americans when German Jewish immigrants entered the country, they did not completely identify with either group. For example, German-Jewish immigrants were often not seen as “white” because they were not Protestant Christians and were foreigners.[2] Yet, they were not seen as African Americans. This racial and religious in-betweens often caused problems for these immigrants who were trying to navigate the racial and religious landscape.[3] 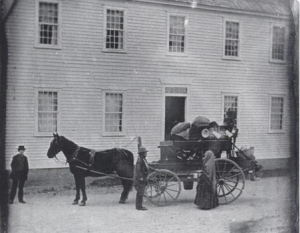 As more German-Jewish immigrants began to enter into the United States, many men began to make a name for themselves in the business world and move from peddling to store ownership. Especially in Alexandria, Virginia, they set up retail businesses, especially dry goods, on the 500 block of King Street. These men were able to join the American middle-class.[5] Below is information on some of the most important businessmen in Alexandria during the mid-nineteenth century:

David Bendheim and his family migrated from Baden. As shown on the 1870 U.S. Census, he had a combined property of $1,500, making him a fairly well-to-do immigrant in Alexandria, Virginia. The 1870 U.S. Census goes on to show that DBendheim became a dry goods merchant, while his wife, Fanny, reportedly kept house. Bendheim worked on the 500-block of King Street, in the middle of the central business district and became a successful dry goods merchant. In the 1880 U.S. Census, it shows that the Bendheims had moved to Ward 2, but were still working as dry goods merchants. His family went on to prosper and grow in Alexandria.

Eichberg was born in 1849 in Wurttemberg and migrated to the United States in the mid-nineteenth century. The 1870’s U.S. Census for Alexandria shows that Eichburg was the head of household of a family of six in the First Ward. It also shows that he was a “lumber dealer” with a combined property of $19,000. This was extremely uncommon, especially of an immigrant in America during this period. In the 1880 U.S. Census, Eichberg and his family moved to Ward 3, and he was listed as a dry good merchant.  He owned Eichberg and Company. He also eventually gained the position aldermen in Alexandria city council.[6]

Born in Bavaria, he moved to Alexandria some time in the mid-nineteenth century and became a dry goods merchant. As the 1870 U.S. Census data for Alexandria shows, Strauss had a combined property of $1,500. He also had a wife, Emma, and two children. By the 1880 U.S. Census, he was a “dealer [in] shoe[s] & clothing.”

Simon Waterman’s entry in the 1870 U.S. Census for Alexandria shows that he was one of the wealthiest immigrants in during this period. Originally from Bavaria, the immigrant owned a clothing store, and had a combined property value of $4,500. Waterman had nine children with his wife, Caroline, as shown in the data below.

Isaac Schwarz moved to Alexandria after migrating from Bavaria. He became a successful dry goods merchant after he took over his brother’s business, and by 1870 had a combined property of $2,000.[8] As shown through the 1870 U.S. Census, Schwarz employed a 22-year-old Bavarian, Ister Briven, who was a clerk. In 1884, Isaac purchased additional property at 522-524 King Street. He went on to also purchase properties at 102 and 104 S. St. Asaph Street.[9]