Why Join the Confederacy?

German-Jewish immigrants of Alexandra were still fairly new to the area at the beginning of the Civil War in comparison to other areas of Virginia. Still, the small population of Jews living Alexandria tended to be strong supporters of the Confederacy, some even fought for the Confederacy.

There were many reasons why the German-Jewish population in the U.S. South supported the Confederacy. For one, they saw themselves as southerners. They had adopted the “southern way of life,” along with their notions of slavery, race, and states’ rights. Few Jews living in the South were wealthy enough to be slave owners, but because they lived in a slaveholding society they accepted the institution in order to avoid any conflict with those whites in power.[1] In Alexandria, most of the Jewish community were merchants, shopkeepers, or rag collectors. Out of the estimated 20-30 Jewish families who lived in Alexandria at the time, only one owned any slaves.[2]

During the antebellum period, southern society had accepted Jews in ways that other parts of the United States had not. The South was fairly religiously tolerant, and while no part of America was anti-Semitism free, because Jews had embraced all aspects of the racial status quo, they were generally accepted in white, native-born, Protestant society. This acceptance caused Jews who lived in the South to a form a loyalty to it. The North was never seen as hospitable to Jews as the South, and that sentiment even transferred into the ways that the Union and the Confederacy were run.

Anti-Semitic feelings among soldiers were common on both sides, but Robert E. Lee recognized the importance of his Jewish Confederates. Union soldiers often openly expressed their anti-Semitism, but it much more rare for the Confederates to do so. Anti-Semitism in the Confederacy tended to be focused on one individual in particular, Judah P. Benjamin. He served in the Confederate cabinet as attorney general, secretary of war, and secretary of state. The Northerners saw him as a secessionist, but Southern anti-Semites blamed him for many of the ills faced by the Confederacy. Being the scapegoat was not an experience unknown to Jews.[3]

Occupation of Alexandria and the Oath of Allegiance

Many of the well known German-Jewish families of Alexandria were avid supporters of the Confederacy. Families, such as the Schwarz, Bendheim, Waterman, Rosenthal, and Strauss, were all open supporters of the Confederacy.[4] Only a few weeks after Alexandria voted to secede, Union soldiers marched into the city and occupied it for the rest of the war. The families who remained, specifically business owners, in Alexandria were forced to either prove their loyalty to the Union or face deportation to areas behind Southern lines. A list of Alexandria citizens who were consider disloyal was made and those on the list included the Watermans, Rosenthals, and the Schwarz.[5] For a time, many of these people refused to the sign the oath of allegiance, and held off signing for as long as they could. If they did not sign; however, they were at risk of losing their businesses and homes that had been theirs for years. A browse of the list of those who signed the oath reveals that Joseph Rosenthal, Simon Waterman, and even Henry Schwarz, a slave owner, signed their allegiance to the Union.[6] While the exact motivations behind the signing of these oaths is unclear, it is within the realm of possibility that these men would rather have sign the oaths than risk deportation and the loss of their long-strived for homes and businesses.

Example of the Oath of Allegiance:

Since Alexandria acted as the Union’s military base and medical center, there were many economic opportunities available. The Union’s occupation of Alexandria brought other German-Jewish merchants to the city in search of economic opportunity from other major cities such as New York, Washington, Baltimore, and Philadelphia.[8] Thanks to a bustling war economy, more Jewish small businesses were established in Alexandria. Prior to the start of the war, 20 to 40 Jewish families lived in Alexandria, after its occupation the Jewish population grew to over 300, many of whom later joined the Beth El Congregation.[9] There were so many Jewish-owned businesses during the Civil War that the Alexandria Gazette reported on Jewish holidays and celebrations so that residents would know about store closings.[10] 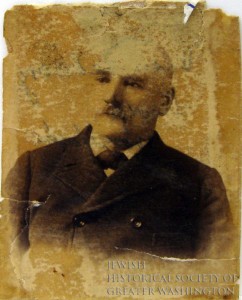 Isaac Schwarz, brother of Henry Schwarz, served in the Confederacy as a sergeant with the 17th Virginia Infantry. He was wounded in the Second Battle of Bull Run and was then given an honorably discharged and returned to Alexandria.[11] Unlike Henry, Isaac did not own slaves.[12] Although his motivations behind serving in the Confederacy are unknown, his choice was most than likely influenced by his loyalty to the South. Henry Strauss, who owned a dry goods store on King Street, also served in the Confederacy, likely driven by his own sense of patriotism. In 1886, Strauss would go on to become Alexandria’s first Jewish mayor.[13]

The Civil War became a large part of the lives of German-Jewish immigrants living in Alexandria. Economic opportunity through the war brought success to these families, expanding the Jewish immigrant population of Alexandria. Due to Alexandria’s occupation, they became heavily involved in the war and its politics either by joining or supporting the war effort, taking advantage of the war economy, or signing the oath of allegiance.