One of the primary reasons German-Jewish immigrants came to the United States, aside from fleeing the Revolution of 1848, was religious freedom. In 1789, there were six Jewish congregations in the US, catering to Sephardic Jews. Three were located in North (Newport, Rhode Island; New York, New York; and Philadelphia, Pennsylvania), and three in the South (Richmond, Virginia; Charleston, South Carolina; and Savannah, Georgia).[1] The second wave of Jewish immigrants to arrive were the Ashkenazi Jews, who were primarily of German or Eastern European descent. While they also came for the chance at religious freedom, they also recognized the many economic opportunities in the New World. Most of them were merchants and peddlers.[2] During the nineteenth century, many German-Jewish immigrants settled in the southern regions of the U.S. This is important because it was in the South that American Judaism would start to change. What would become known as Reformation (or Reformed) Judaism would have a very important role to play on German-Jewish immigration in the U.S. South.

In order to adapt more easily into southern society, congregations across the U.S. South pushed for reform. Most of the results of the Reformed Judaism movement resulted in becoming more like the Protestant Christian churches. Reformation Judaism started in Charleston in 1824 with the Kahal Kodesh Beth Elohim congregation.[3] While the KKBE was the first congregation that pushed for reform, the idea of easing the transition into proper southern citizens by reforming the church was starting to spread.

There were many changes that resulted from the development of Reformed Judaism. One of the main issues for reformers was that the congregation no longer understood Hebrew.[4] They wanted shorter services to be either given or repeated in English so that more people could understand. Another result of the reformation movement was the now families could sit together in pews and have their worship services accompanied by organ music mimicking their Christian neighbors.[5] All of these changes helped aid German-Jewish immigrants in their adjustment into southern society. 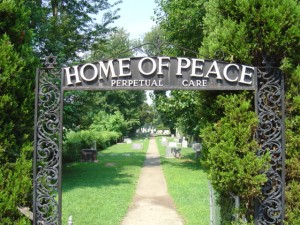 Home of Peace Cemetery founded by the Hebrew Benevolent Society courtesy of www.findagrave.com

As previously stated, the thought of reform touched many southern congregations, including Alexandria. While there were most likely families that settled in Alexandria prior to 1850, most of them came to the city during the 1850-1860 period. By 1856, there were roughly thirty German-Jewish immigrants living in Alexandria.[6] From the start, the German- Jewish community in Alexandria strived to make an organization to maintain their faith. In 1856, the community formed the Alexandria Literary Society, which was led by Henry Blondheim and was the first attempt to give these predominantly single men an organized place of worship.[7] In 1857, the German-Jewish community established a Hebrew Benevolent Society, which purchased a plot of land to be used for Home of Peace Cemetery.[8] By 1859, over fifty German-Jewish immigrant families were calling Alexandria home. With this great influx of immigrants, it was decided among the community that a permanent house of worship was necessary.[9] The name of the congregation would be the Beth El Hebrew Congregation. 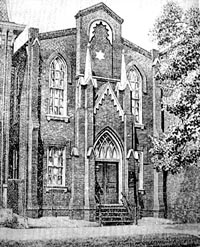 While most members of the German-Jewish community were in favor of the reformed ideas, some preferred what would be known as Conservative Judaism. In order to not break up the German-Jewish community, the solution was to hold joint holiday services for both congregations.[10] In 1871, the Beth El congregation opened its first permanent temple located on Washington Street where it stayed until 1956.[11] The Beth El congregation was an influential organization from the start. Most of the early members were involved in businesses and would grow into being some of the most influential people in Alexandria in the mid-to-late nineteenth century. 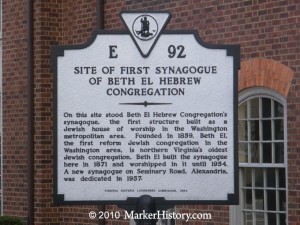 Historical marker for the founding of the Beth El Hebrew Congregation
courtesy of www.markerhistory.com

Many German-Jews who settled in the U.S. South (including members of Beth El) were in favor of reform, but not all.  Nevertheless, the establishment of the Beth El Congregation gave German-Jewish immigrants a space to maintain their religion heritage as they simultaneously adapted to life in Virginia in the nineteenth century.

[3] Gary Philip Zola. “The Ascendency of Reform Judasim in the American South during the 19th Century,” in Jewish Roots in Southern Soil: A New History, ed. Marcie Cohen Ferris and Mark I. Greenberg (Lebanon, NH: University Press of New England, 2006), 157.