Introduction
Central American women, including women from El Salvador, often decided to migrate to countries such as the United States by themselves, demonstrating considerable autonomy that wasn’t recognized until the mid 1990s. [1] Central American women faced hostility from the United States, especially regarding immigrant policies and demanding working conditions. Finding jobs in domestic service positions such as housekeepers, Salvadoran women took whatever jobs they could find, even if those jobs weren’t glamorous. The desire for a better life for themselves and/or their families motivated them to take low-paying jobs that were associated with women of color. Relationships between Salvadoran women and their families were also affected by the women’s decision to migrate to the United States, as cultural differences in the role women play in public and private life had the potential to cause significant conflicts.

The Civil War and U.S. Reception

The Civil War in El Salvador was doubly disadvantageous for rural Salvadoran women, because of a lack of inheritance rights and lack of paid employment opportunities in the agricultural industry.[2] Women in cities didn’t fare much better, as women were usually the first to lose their jobs and had to find work in domestic service or other informal jobs.[3] Many who fled El Salvador for the United States during the 1980’s attributed their decisions to leave their homes to the oppressive political environment, civil strife, and difficult economic circumstances.[4]

Salvadoran refugees, particularly Salvadoran women, were often the target of hostile reception from U.S. officials, as they were fleeing from a country that the U.S. supported.[5] Salvadoran refugees in general were denied asylum as the U.S. under Presidents Regan and George H.W. Bush reasoned that the Salvadorans were simply “economic refugees”, subsequently lumping them together with other Latin American immigrants.[6] It was even harder for Salvadoran women to obtain political asylum, as asylum judges often failed to view the persecution that women experienced as political persecution, as they felt that women were “often persecuted by individuals without direct connection to the state, such as guerrilla groups, intimate kin, and even strangers.” [7] Asylum judges subsequently employed “culturally racist” constructions of gender, esp. with Latina women, and this hurt Latina women’s chances of obtaining asylum, even if the women were indirectly linked to political movements.[8]

Regardless, many Salvadoran women ended up in the D.C. metro area, including Alexandria, V.A. The D.C. metro area was extremely popular for migrants during the late 70s and early 1980s due to the booming economy of the time period.[9] Central American women in general were part of the initial immigrant flux that Washington experienced during the 1960s and 1970s, and it was these women who helped subsequent immigrants (often relatives) find jobs. [10]

Many Salvadoran women were able to find employment through work recruitment or already had jobs arranged for themselves in Washington. [11] Motives for recruiting Central American women into domestic service jobs were often due to a lack of alternative labor pools. [12] In an interview with the Washington Post, Evelyn Gonzalez, a caseworker at a social service agency in Adams-Morgan, argues that despite consequences for employers who hire undocumented immigrants, the desperate need of workers, especially in low-skill jobs such as dish washers or domestic work, motivates employers to take risks. [13]

Those who came to the United States before 1980 were recruited to work for American diplomatic families as live-in housekeepers.[14] However, domestic work proved to be a blessing disguised as a curse for these women. While domestic work in Washington gave Salvadoran women a chance to escape the oppressive conditions back home, domestic work did not provide many opportunities for mobility. One possible reason for the lack of mobility outside of a lack of marketable skills, such as perfect English, was the association of Central American women with child-care. Central American nannies, including Salvadorans, were thought to be very warm and nurturing with children.[15] Despite this thinking, many Central American women who worked in domestic service were paid relatively little by their employers. Salvadoran women, although they wanted better paying jobs and mobility, had very few options besides domestic work, as their employment by U.S. diplomatic families protected them from being deported, as many Salvadorans were considered to be undocumented or “illegal.”[16]

Wages earned by Salvadoran women were typically less than Salvadoran and other Central American men.[17] However, what is interesting about this trend is that Central American women who worked in domestic service jobs had lived in the United States for longer periods of time and they often had higher education levels compared to Central American men.[18] However, levels of education didn’t appear to impact how much Salvadoran women made even in domestic service jobs. Terry Repak in Waiting on Washington argues that the reason for these trends is that Washington was not a city of production jobs but rather service and government jobs, thus limiting immigrant women in occupations that were available to them.[19] Gender bias also played a huge role in limiting employment to domestic service positions for Salvadoran women, as “women’s work” was undervalued and those employed in positions like domestic workers lacked access to higher-paid occupations.[20]

However, despite “women’s work” not being valued in Washington’s labor market, Salvadoran women, and other Central American women, worked hard to make better lives for themselves and the families, if they subsequently followed them to the United States. 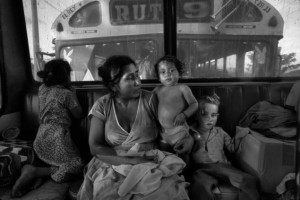 Central American women, as previously mentioned, exhibited considerable autonomy when deciding to migrate to the Washington metro area. Some came alone and established families in the United States and some came to the United States alone with their families back home.[21] Many Salvadoran women who had family back home sent what was called “remittances” to family members to provide financial resources to those left behind.[22] However, remittances were not only cash benefits to families in poorer countries; they also served as a way of reassuring that family connections were still strong despite obstacles and distance.[23] Cecilia Menjıvar argues that gender plays a critical role in how Salvadoran and other Central American women construct their obligations towards their families without direct face-to-face contact. She further argues that remittances played a role in this construction of obligations, as women who left their children behind were more likely to continue sending remittances of money and gifts for longer periods of time compared to Central American men.[24]

Legal obstacles and cultural adjustments also impacted family relationships and dynamics for Salvadoran women. Due to the legal uncertainty that many Salvadoran women faced as a result of U.S. immigration policies (such as IRCA), many women emerged at the center of the challenges that they and their children faced due to separation.[25] In a study done on immigration policies, Menjıvar noticed that Salvadoran women, along with other Central American women, appeared to feel guiltier about leaving their children back home compared to the men, as these women felt pressured to make up for “abandoning their children,” even if they migrated with the intentions of bringing their families to live with them.[26]

However, family reunification was anything, but easy for these women. Expectations that both parents and children had for one another were, more often than not, unrealistic.[27] Even if the mother’s intentions for leaving them behind at home were for the best, children in particular often accused their mothers of abandoning them, putting even more pressure on the women, as they most likely already felt guilty for trying to improve the families’ economic standings by working in a foreign country.[28] The uncertainty of whether they would be deported back to El Salvador put even more strain on Salvadoran women, as it often fell to the mother to obtain services such as medical care when family members got sick, since many were undocumented, they lacked the recognition necessary to access  services that were only available to U.S.-recognized refugees.[29] Children were also more likely to adapt to the customs of their new home than their parents, and this led to the alienation of mothers from their children as the children gradually lost respect for parental authority.[30]

Cultural expectations for women in the United States were also a huge change for Salvadoran women and men. Many single Salvadoran women entered the workforce in Washington as their families primary or even only means of economic survival.[31] However, those who were married had to redefine traditional ideologies that cast men as the sole provider for families simply because couples and their families were unable to survive on a single income.[32] However, Terry Repak noted in Waiting on Washington that through a study of the experiences of Central American workers in Washington, some of the women interviewed “complained that men who originated from the countries that they migrated from still held traditional patriarchal attitudes towards women even after settling in the United States.”[33] Many women in Repak’s study claimed that relationships with their husbands or significant others became increasingly strained as a result of women trying to negotiate new relationships within their adopted country.[34] Men who originated from the same region that their wives came from often had a negative reaction to their wives adopting “first world” gender roles.[35] Central American, including Salvadoran, men felt threatened by their wives new found “financial and personal independence if it was their wives who were working.”[36]

Salvadoran women faced numerous challenges from escaping persecution in their home countries to trying to forge a new “first world” identity for themselves with newfound autonomy. But in light of the newfound freedoms regarding gender roles that many Salvadoran women experienced, they also had to face limited mobility in regards to obtaining meaningful employment (and safe and fair working conditions) and reuniting with the families that remained in war torn El Salvador.