As the civil war began to pick up and worsen in the 1980s, Salvadorans began fleeing the country in large numbers. One of the biggest struggles that Salvadorans faced in Alexandria and across America was the fact that they were denied refugee status and/or political asylum. This can be attributed to the fact that the U.S. government in the 1980s was biased against refugees fleeing governments then supported by the U.S. In contrast, migrants fleeing communist governments were granted refugee status as well as political asylum in much higher percentages. This caused Salvadoran to be a largely undocumented or “illegal” group of immigrants, much more so than other populations fleeing political unrest and persecution.

The above image is how a refugee is defined under the 1980 Refugee Act. Clearly after reading about the Salvadoran civil war these many Salvadorans living in the Alexandria area fit this description. Despite this fact, Salvadorans were rarely given the benefits of refugee status, such as medical care, housing assistance, and job training that was afforded to groups like Vietnamese and Cubans.[1] The result of not being treated as refugees was that the Salvadoran population was pushed underground, forced to live and work while trying to avoid the INS for fear of being deported. 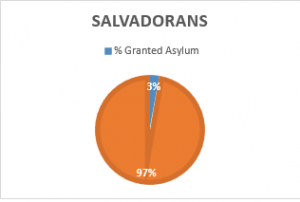 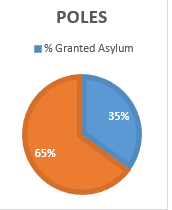 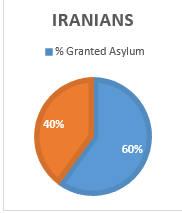 A common argument against the case of undocumented Salvadorans in the U.S. was that they were actually economic migrants, simply moving to the U.S. in search of a better life. This sentiment was shared by officials of the U.S. Department of State and the department of Justice.[3] Senator Alan Simpson was one of the main proponents of this argument, claiming the situation had improved greatly in El Salvador and that these Salvadorans had no real fear of persecution at home.[4] This argument was of course incorrect, as the horrors of the Salvadoran civil war continued throughout the 80s and the political climate was still extremely dangerous for returning deportees. Also it is important to note the case was not that American officials did not realize the bloodshed was still occuring, they simply wished to turn a blind eye and play it down to the public. This fight over whether or not to deport undocumented Salvadorans or to grant them political asylum continued throughout the 1980s with no real improvement on the situation until 1991.

Salvadorans’ battle for fair treatment received great attention in U.S. politics and was addressed by a number of settlements and suits including American Baptist Churches vs. Thornburgh, which began in 1985 when a group of religious organizations and advocacy groups sued the INS for their unfair treatment of Salvadoran and Guatemalan refugees attempting to receive asylum. The suit was settled in 1991, and improved policy on this subject. This settlement allowed for Salvadorans to stay in the U.S. a bit longer with the ability to apply for asylum, although at this point so many were already living in Alexandria with their families that going back was not as attractive an option; many had been here for almost a decade at that point.

Realizing these facts about Salvadoran migrants goes to show why the vast majority were undocumented and struggled because of it. Furthermore the “illegal” status put on these migrants was by and large the result of U.S. politics regarding the conflict in their homeland, which the U.S. also had a hand in creating. Despite nearly half a million Salvadorans entering our country during the 1980s, if not more, the Department of Homeland Security lists 130,000 have become legal residents. When you realize this number includes those naturalized by the IRCA, which will be discussed next, one can see how much of a problem this was for our Salvadoran community. Salvadorans struggle to become documented began with this basic issue of them not being treated as the refugees that they were; however, this was not their only problem. Other immigration laws continued to make difficulties for Salvadoran immigrants.

Next: Immigration Reform and Control Act