The Salvadoran Civil War that broke out in October 1979, and was the product of political and economic instability. Prior to the war, El Salvador was controlled by a political oligarchy along with the military, which included wealthy, landowning families who were resistant to reforms that would take power away from them (esp. land reform).[1] As Stuart Fisher notes in his article on U.S. foreign police in El Salvador, leaders were unable to “institute necessary social reforms, because of the continuing power of the conservative landed oligarchy.”[2] 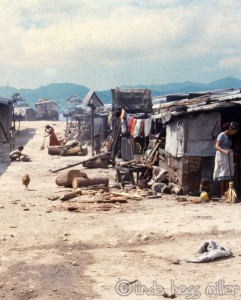 To protect their assets, the Salvadoran elite felt a need to oppose communism, which was growing in popularity in some parts of the country. In 1932, the Salvadoran government refused to recognize communist victories in municipal and legislative elections.[3] Communist Salvadorans called for insurrection to get their victories recognized, and an uprising ensued. However, this uprising was crushed by the Salvadoran military, who then went on to slaughter thousands of people who were suspected to be communist rebels. This massacre became known as La Matanza, or the massacre.[4] The significance of La Matanza was that any political party that advocated for social justice and reform was subsequently accused of being influenced by communist ideology by the ruling elite.[5]
Tensions escalated for years, and in October 1979, a coup d’etat was staged by military officers who wanted to implement some reforms. They overthrew the government and they established a junta. [6] The junta declared intentions to promote basic reform in the country’s agrarian and financial systems.[7] However, the country’s elites protested and halted the junta’s proposals.[8] The landowning oligarchy, along with security and military forces that backed the regime, began to target peasant leaders, union members, teachers, and clergy who argued for social reform, as the fear of communism led the military and politicians to suspect anyone who questioned the status quo.[9]

As targets of violence combined with poor economic conditions, many Salvadorans fled their homes in the hopes for living in peace and safety.  Many of them ended up in the Washington D.C. metro area, including Alexandria, Virginia.