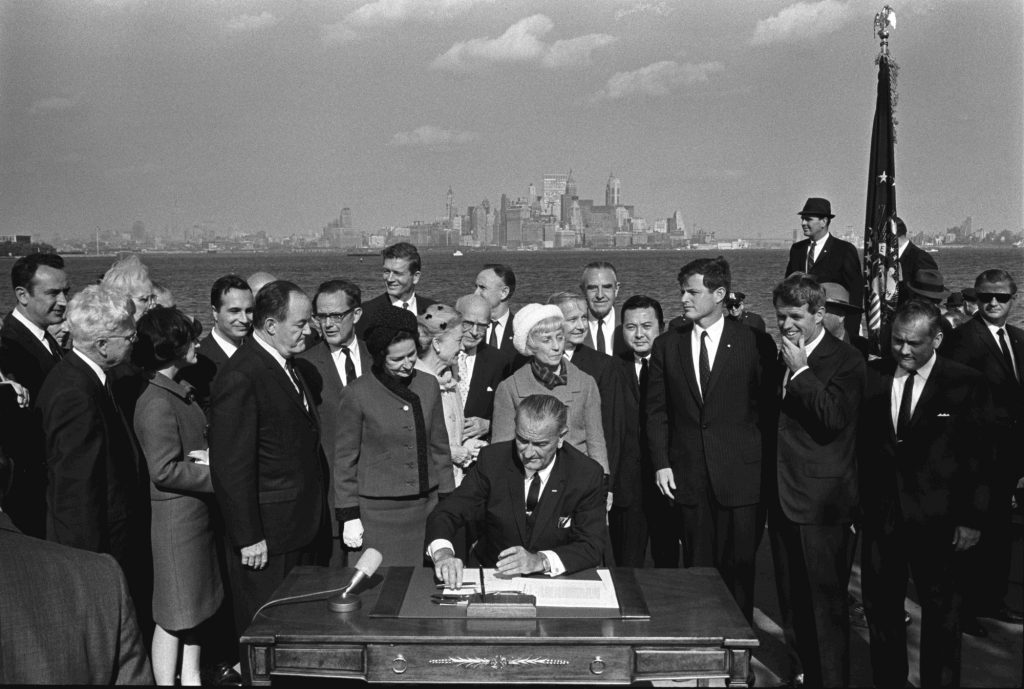 The passage of three individual United States immigration laws over a period of twenty-five years permitted hundreds of thousands of Ethiopians to immigrate to the United States during the late-twentieth century. The first law was the Immigration and Nationality Act (1965), also known as the “Hart-Celler Act,” which set aside past discriminatory national origin quotas that favored foreign nationals from select European countries.[1] Henceforward, this new overhaul in the law coupled with European decolonization across the African continent led to greater admittance of African immigrants into the United States.[2] Meanwhile, throughout the following decade, political turmoil and conflict in places such as Vietnam, Somalia, Ethiopia, and the Balkans prompted the enactment of the Refugee Act (1980). Under this law, Congress accepted a predetermined number of refugees for resettlement in the United States, which averaged roughly 100,000 refugees per year.[3] According to a study conducted by the Brookings Institution, nearly two million refugees came to the United States under this program between 1983 and 2004. Of this amount, over thirty-five thousand were Ethiopian refugees and about ten percent of these people resettled in the Washington, DC metropolitan area.[4] Finally, ten years later, the Immigration Act (1990) instituted the Diversity Visa Program, which made it possible for even more Sub-Saharan Africans, including Ethiopians, to immigrate to the United States under work visas.[5]

(Images Courtesy of the Brookings Institution [6])

[1] Tom Gjelten, A Nation of Nations: A Great American Immigration Story (New York: Simon & Schuster, 2015), 138. According to the National Public Radio’s (NPR) website, Gjelten has been with NPR since 1982 and he is the recipient of two Overseas Press Club Awards, a George Polk Award, and a Robert F. Kennedy Journalism Award. For more, see National Public Radio, “Tom Gjelten,”accessed November 16, 2016, http://www.npr.org/people/2100536/tom-gjelten.
[2] Ibid., 140.
[3] Audrey Singer and Jill H. Wilson, “From There to ‘Here’: Refugee Resettlement in Metropolitan America” (Washington, DC: Brookings Institution, 2006), 2-3. Wilson is a senior research analyst at the Brookings Institution.
[4] Singer and Wilson, “There to ‘Here,’ 16-17. Other cities where large numbers of Ethiopians resettled included Minneapolis-St. Paul, Minnesota, San Diego, California, Atlanta, Georgia, and Dallas, Texas.
[5] Elizabeth Chacko, “Ethiopian Ethos and the Making of Ethnic Places in the Washington Metropolitan Area,” Journal of Cultural Geography 20, no. 2 (Spring-Summer 2003): 26-27. Chacko is a geography and international affairs professor at George Washington University. She has completed field work in a number of countries, including Ethiopia.
[6] Singer et al., The World in a Zip Code: Greater Washington, D.C. as a New Region of Immigration (Washington, DC: Brookings Institution, 2001); Singer and Wilson, There to ‘Here.’