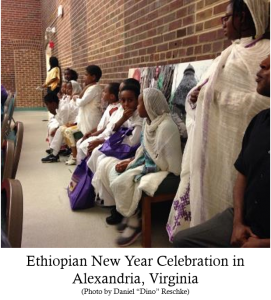 In addition to the lack of recognition, struggles with English language proficiency, and downward mobility, Ethiopians struggle with identity formations and transformations. This is especially true for the second-generation African immigrants living in Alexandria, as it is a diverse area with a large Black population.[1] Therefore, Ethiopians are confronted with a linear racial categorization constructed by physical categories and phenotype.[2] Ethiopians as a whole find racial constructs ambiguous and questionable, disliking the stark binary of black and white.[3] This creates a mistrust of government and the appearance of tracking people for a hidden agenda. Likewise, by placing Ethiopians in the black category, it erases a sense of cultural heritage and ethnic pride.[4] First-generation Ethiopians are especially mindful of this and wish to distance themselves from being generalized as Black. Additionally, they want the same for their children arising out of national pride and fear of losing their authentic identity. Second-generation Ethiopians, however, feel tremendous pressure to identify with being black in a contemporary culture that places a racial identity above an ethnic one.[5] After all, feeling at home in the host country is proven necessary for immigrants to survive such transformation.[6] 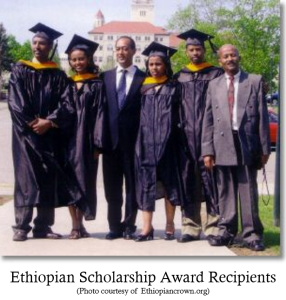 Second-generation Ethiopians tend to grapple more with, “Who am I?” They are caught between a desire to identify with their cultural pride, instilled by parental desires, while at the same time meeting demands of assimilation into American culture. Second-generation Ethiopians sometimes experience criticism for being “too American” by their families and risk being treated as “outsiders” and not “wholly Ethiopian.”[7] Additionally, they are forced to succeed in an American society that distinguishes between race and identity.[8] They posses a constant fluidity of identity dependent upon which parts of their ethnicity is performed in particular spaces and places. They learn to retain or jettison ethnic identity without largely changing daily life. Young Ethiopians continually confront anxiety over preserving, relinquishing or transforming ethnic identity in attempt to navigate successfully through life.[9]

Part of the Ethiopian identity formation and transformation comes from a navigation of physical space in an American society that asserts a different idea concerning what is acceptable in terms of landscape. Urban and suburban spaces become entangled in meaning as immigrants attempt to set up businesses and create spaces that are culturally characteristic with an ethnic affiliation, much like Italians in New York and Chinese in San Francisco. As an example, a thickly clustered commercial enclave existed on 18th Street in the Adams Morgan area of Washington, DC, until gentrification and increased real estate prices diluted its presence.[10] For native-born persons and Americans, certain places hold value, a precise history, and therefore invite nostalgia generating ethnic rivalry over the space.[11] For the newer generation of immigrants, they feel that they do not have the ability to create their own symbolic expression due to affluent community members.[12] For Ethiopians, landscape markers reflect their native culture and reminders of home. These businesses are a testament to having attained the American dream through autonomous self-determination, despite adversity.