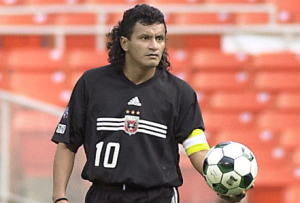 Many Americans believe that immigrants, especially those whom do not speak English and are not white, create miniature versions of home in American cities. It is true that, in Washington, D.C., Ethiopian businesses and homes have existed since the late 1970s. In her article “Ethiopian Ethos,” Elizabeth Chacko calls these neighborhoods ethnic sociocommerscapes where “Ethiopians sustain their ethnic identity and heritage in ways that leave imprints on the urban and suburban landscapes.”[i] However, as seen through maps from the 1980’s to the present, the boundaries of these “Little Ethiopias” evolve over time. While many commercial locations remain inside the city, Ethiopian immigrants today are more likely to live in Alexandria, Virginia and or Silver Spring, Maryland. These neighborhoods and commercial areas are separated from one another, and additionally far less homogenous than perceived. 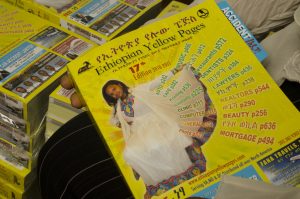 According to the information available in Mama Tutu’s Ethiopian Yellow Pages (Figure 1), a directory for Ethiopian businesses throughout the area, it appears that the first recorded concentration of one of these ethnic sociocommerscapes was in DC’s Adams Morgan neighborhood in the late 1980’s.[ii] In the 1990’s, another concentration of Ethiopian businesses and homes appeared on U Street, not too far from Adams Morgan.[iii] Today, many of the newer businesses listed in Mama Tutu’s Yellow Pages are things like camps, churches, and soccer teams in Arlington and Silver Spring.[iv] This is important because it means businesses by and for Ethiopian immigrants in the surrounding suburbs of D.C. are advertising elsewhere.

This trend of Ethiopian ethnic sociocommerscapes stretching beyond the D.C area in multiple locations can also be seen in Chacko’s article. She includes a map of where Ethiopian immigrants live and have businesses in Washington D.C. that she created using census data from 2009. As seen in her map (Figure 2), there are still businesses, like grocery stores and restaurants, in Adams Morgan , but more Ethiopians are actually living in Silver Spring, Maryland or Arlington, Virginia.

Courtesy of Elizabeth Chacko, “Ethiopian Ethos and the Making of Ethnic Places in the Washington Metropolitan Area,” Journal of Cultural Geography 20 no.2 (2009)

In an article from 2015 in the Greater Greater Washington, a Washington D.C. online news source, journalist Dan Reed also explains the evolution of Ethiopian neighborhoods. In a map created by Reed (Figure 3), it is evident that most Ethiopian immigrants have moved entirely out of the district. Although they have many businesses inside the city, most of them by 2015 live either in Silver Spring or Fairfax.[v] Reed explains that this is likely due to the high costs of living inside the city (and possibly the inner suburbs), crime rates, and the quality of schools in the surrounding areas.[vi] 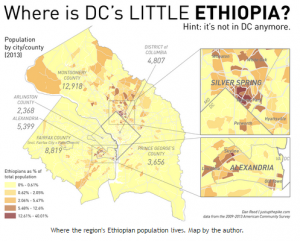 What these maps show is that “Little Ethiopia” is not isolated to one area nor is it excluded to Ethiopian immigrants. Currently, Ethiopians in America live in different areas than they work and develop new businesses all throughout the Washington area. Although they have commercial areas inside the city, they live in the surrounding suburbs. While they undoubtedly create communities, or ethnic sociocommerscapes, they are far more integrated into the city than a term like “Little Ethiopia” would let us believe.

[i] Elizabeth Chacko, “Ethiopian Ethos and the Making of Ethnic Places in the Washington Metropolitan Area,” Journal of Cultural Geography 20 no.2 (2009): 29.

According to Donna Gabaccia, in her book Italy’s Many Diasporas, Italian migration happened in waves and there were different motivations for emigrating that depended on social status, political climate, and economics. One of the waves Gabaccia describes as the “Workers of the World” included mostly young men, often single, who left Italy for work.[i] These Italians immigrated to America to find jobs, make money, and return to Italy. When looking at Italian immigrants living in Alexandria from the 1920 U.S. Census, I was most interested in these “workers of the world,” and yet, their position as such made them difficult to find them. Twelve Italian immigrants, eight of whom were single men, boarded together on 23 B North Columbus Street.[ii] Given that they were not establishing a home nor a family, these men were likely not planning on staying in the United States. When I tried to research the individual men, I could not find record of them beyond the census (although there could have been alternative spellings of their names). For example, Vincent Till, a 35 year old fireman working at the Acid Plant, or his brother, Frank Till, working the same job, are unable to be tracked in any birth, death, or marriage certificates nor any travel or immigration documents on Ancestry.com.[iii] Vincent Till and Frank Till are not an anomaly, the same thing happened when I searched for Anthony Capalai, a 21 year old carpenter, and Joseph Cappolett, a 24 year old truck driver.[iv]

As you can see in Figure 1, the location of this apartment on 23 North Columbus Street is just a couple blocks from the water. Many of these lodgers were likely working in the port on the Potomac River. This gives more evidence to the idea that people like the Tills, Capalai, and the Cappolett were here exclusively for work, even if that meant squeezing into an apartment that was close to work just to save money and prevent any extra costs. 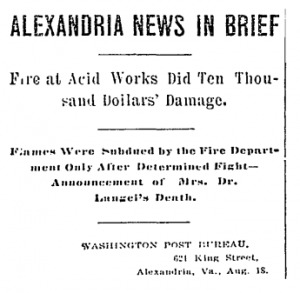 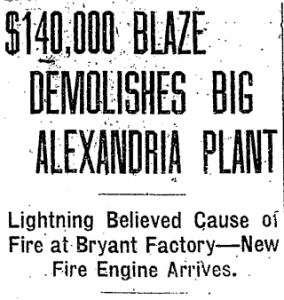 Although there is not enough information available to truly understand the lives of these men, the limitations of the data available speaks volumes. If they had chosen to stay in America, establish families, continue to work, there would likely be record of such, although changes in spellings make it difficult to track them. This fact, combined with poor and dangerous working and living conditions, explains why these “workers of the world” likely migrated to other countries for better work and or returned home to Italy.

Throughout Invisible Immigrants by Charlotte Erickson, I became increasingly curious about English immigrants who went into professional and clerical occupations and became town dwellers (as opposed to rural or industrial occupations). According to Erickson, these immigrants “broke more ties in emigrating”[i] than other English immigrants and neither held professional qualifications nor white collar jobs prior to emigrating.[ii] One English immigrant in particular that fits this category is Philip Park. I found him first using census data sorted by occupation and value of property. I was looking for someone like Park, an English immigrant who holds a profession and has some property. He appears on the U.S. Census in 1860 as a 38 year old plumber with a property value of $150.[iii] He again appears in the 1870 U.S. Census with an increased value of $4,400 and alongside his wife, Catharine, and his three daughters, Virginia, Gertrude, and Catharine.[iv]

This rise in wealth had to be addressed, but first I had to get a better understanding of Park and his family. Using Ancestry.com, I found that he and Catharine were married in 1856 in Alexandria.[v] This means Philip came to America a single man, which, according to Erickson, is true for other English immigrants entering professional positions. His three children were all born in the United States.[vi] In Figure 1, from Don De Bats project “Voting Viva Voce,” we can see where Philip and Catharine Park lived on the corner of Prince and S. Pitt Street in front of the bank and across the street from St. Paul’s Episcopal Church.[vii] He lived in the middle of town, which is where he also conducted his business.  Considering his wealth and advertisements in the Alexandria Gazette (see Figure 2), he was a well-known plumber.[ix] 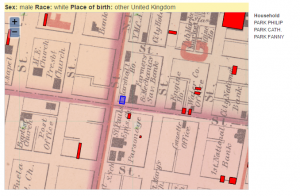 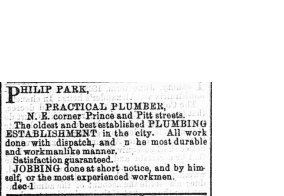 There is a lot we cannot understand about Philip Park and his family due to the limitations of data. However, as typical in history, there are things about Park that can be explained although not proven. Park’s considerable rise in wealth between 1860 and 1870, from $150 to $4,400, is striking. In comparison to other business owners on the 1860 U.S. Census, Park held much more property value in 1870.  I tried finding him in tax records or any mention of his involvement with the Union in newspapers and I could not. However, it is possible that his ties to the Union, if they existed, allowed him to be successful in a time of war.