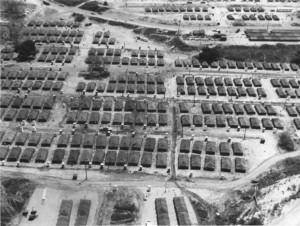 As Vietnamese refugees came to America and began to settle into their new lives, they were forced to adapt to the culture around them in some ways. This adaptation was not all encompassing and final, as we will discuss later, but it did have a tremendous effect on how well these refugees did in America. Selectively adapting to their new homes began in earnest as soon as they reached American soil, in refugee camps set up by the U.S. government. The four major camps Vietnamese found themselves in were “Camp Pendleton in California, Fort Chaffee in Arkansas, Eglin Air Force Base in Florida, and Fort Indiantown Gap in Pennsylvania.”[1] Within these camps, refugees were subject to what amounted to re-education efforts by various government agents who sought to make them over into their version of “authentic and enthusiastic Vietnamese immigrants.”[2] In order to mold these immigrants into what the American government wanted them to be, the refugees were tasked with learning “‘God Bless America’ in English and Vietnamese” as well as “American history and government, American customs, home economics, and cooking.”[3] As evidenced by many of these refugees, the days in these camps were extremely formative to the rest of their lives in America. In these camps, many refugees dropped their Vietnamese first names and began going by “Mary” and “David.” Clearly, education in these camps played a major role in how Vietnamese refugees adapted to their new home in America.

A more specific example of selective adaptation is the Dinh family, who were initially sponsored by Blessed Sacrament, a Catholic Church in Alexandria, Virginia. The Dinh family were part of the first wave of Vietnamese refugees to enter the United States. Once in Alexandria and then Springfield (where they found more affordable housing), they quickly adopted the cliché theology of “pulling themselves up by their bootstraps” and worked “alternating night and day shifts so that one of them would always be home” for thirteen years.[4] Through their efforts, they also had six children graduate from the University of Virginia. The Dinh family not only adopted what is often described as the Protestant Work Ethic, but they also understood how important education was in American society. Thuc and Thanh both attended college in Saigon, and they believed that “education would be their children’s passport to success in their adopted land.”[5] Education is held high in American culture and many Vietnamese that fled here understood this fact, and began to invest heavily in the education of their children.

[4] Marylou Tousignant, “A Family Succeeds by Degrees; All Six Children of Vietnamese Immigrants Graduate From U-Va,” The Washington Post, May 17, 1996, A01.