When migrating to the United States, migrant groups would often come together to form communities within their new city. These areas would be called ethnic enclaves. Beginning in the 1880s and up to the 1920s, new groups of Italians began another wave of migration to the United States. About four million Italians have been estimated to have entered the US during this time.[i] It is important to note that while the time frame for migration from Italy to the US was from 1880 to 1920, this website’s time frame for research is from around the 1880s to the 1940s. Popular cities to move to in the US were Manhattan, Boston, Philadelphia, and Baltimore.[ii] These places had established communities where new arrivals could network, continue to speak their native language, and enjoy a community experience similar to ones found in Italy. This section will look into why certain Italian migrants chose to migrate to Alexandria, Virginia during the late nineteenth to the early twentieth century.

Early in Alexandria’s history, the city became a transportation center.[iii] It’s position to the Potomac River was desirable in creating this legacy. The city continued as a transportation hub within the state of Virginia by introducing a railroad yard. On August 1, 1906, the Potomac Yard was opened. This new yard was one of the largest of its kind in the United States.[iv] The original instillation included 450 acres, with 53 miles of track that had the capacity for over 3,000 railroad cars.[v]The economy in the Alexandria would flourish due to the building of the new yard. The creation of the new tracks would create thousands of jobs for unskilled workers and would continue to draw more unskilled workers to Alexandria as companies used the yard for their base of operations. An example of this would be the Fruit Grower Express. The Fruit Grower Express was a company that constructed and repaired refrigerated railroad cars.[vi] Over time, the company would become a crucial part of the economy in Alexandria, as it was the employer of hundreds of workers. The company had two yards, one in Alexandria, Virginia and the other in Jacksonville, Florida. The bigger of the two locations was in Alexandria, and according to the Alexandria Gazette it employed 400 workers where approximately 1,000 cars were worked on and repaired a month.[vii] A few of the families in the coming section would work in the rail yard for the Fruit Grower Express. It was a prime destination for unskilled migrants looking for a job opportunity in the US. 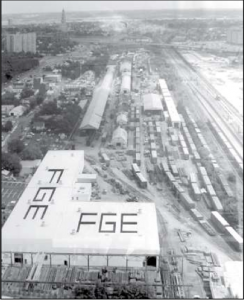 At the start of the twentieth century, Alexandria was experiencing incredible economic growth. As a manufacturing center, from 1899 to 1915 the city of Alexandria led all other Virginian cities, outside of Lynchburg, in the increased production of goods.[viii]  The most important industries produced were glass, fertilizer, beer and leather. This continued the trend that Alexandria was a place of opportunity for workers searching for jobs. The city was home to 54 manufacturing establishments which employed around 1,700 persons.[ix] At the turn of the century, the city of Alexandria was an area undergoing incredible growth. Due to the increase in jobs within Alexandria, residents would have extra income to spend in town. This would create opportunities for more skilled laborers to create businesses that would meet the needs of the residents of Alexandria. In the coming section it can be noted that not all Italian migrants worked for a manufacturing company or for the Fruit Grower Express, instead some created their own businesses. One such family was the Guiffre family. In this particular case, Tony Guiffre worked for his father as a shoe repairmen in DC, until he took over the shop. Ultimately Guiffre would create his own beer distribution company in Alexandria, as the city was a large producer of beer. Alexandria had a booming economy that inspired skilled workers to use their skill sets to create businesses within the town of Alexandria. Everyone had their role in Alexandria’s society.

Millions of Italian migrates, from around 1880 to 1920, made the United States their new home. Many of these migrants would move to cities such as Manhattan, Boston, Philadelphia, and Baltimore, but a select few made Alexandria, Virginia their final destination. The reason for these migrants to choose Alexandria was for economic reasons. At the start of the twentieth century, Alexandria was a growing city. With the introduction of a new rail yard and new manufacturing establishments, these Italian laborers embraced the opportunities to work. Thousands of people gained employment and increased their spending capability. This created a market for businesses to crop up in Alexandria. In the next section, look at the different jobs that the Italian families worked in. Most of the families researched supported their family through work at the rail yard, but some with skills opened up their own businesses. The Opening of the Potomac Yard in 1906 created the opportunity that drew Italian migrants to the city of Alexandria. Alexandria had always been a transportation center, and during the late nineteenth to early twentieth century the city continued that legacy.

Homepage | Next: Italian Families in Alexandria