Most studies of Greek Orthodox religion in America focus on larger Greek communities then the Alexandria community. This trend was in part because, in order to found an official church recognized by the Greek Orthodox Church a “church must have at least fifty families,” just to get a charter and then later a religious leader.[1] Since the Alexandria Greek immigrant community was not excessively large they combined with other nearby cities Greek communities for religious celebrations. 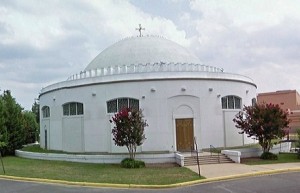 Churches served as ties to Greek identity. The Greek Orthodoxy was central to Greek immigrants way of life. Since many Greeks originally had the goal of returning home to Greece, maintaining their religion and culture served as priorities.

Over time, as Greek immigrants started the process of selective adaptation, services were not always in the Greek language and less formal. Like many immigrant groups, religion changed and adapted to fit their new lives. For Greeks, however, the sense of being Greek remained extremely important, which is why Greek Orthodox churches often worked with Greek social groups to create language schools to help the next generation maintain their Greek heritage. Overall, the changes that did occur in Greek Orthodox churches were to make them similar to Protestant ones. Yet, it was still pivotal to maintain a strong sense of Greek pride and heritage. There was a pride that came from being Greek, and the first generation Greek immigrants wanted to share this with their descendants.