In the mid-nineteenth century, Alexandria had a healthy population of English immigrants who occupied a variety of occupations from low to high skill, pre and post industrial labor, subsistence to affluent incomes. As Alexandria was a port city, consumer, commerce and industry were the main source of capital for English immigrants. The most numerous of English immigrants who had come the United States, farmers, found the urban Alexandrian economy inaccessible and non-beneficial, thus are underrepresented in the census and other records. Many of the pre and post industrial labor skills that English immigrants brought with helped to make their transition into American life easier as they were valued for their prior experience from England. Those immigrants who entered Alexandria’s mercantile sector found the most success, earning tens and sometimes hundreds of thousands of dollars. However, Alexandria was invested in slavery, the American Civil war would prove devastating to their economy. While the conflicted affected everyone in Alexandria, the English were hit hard by the before the war, there were twenty-eight English immigrants property over a thousand, after that number dropped to sixteen.[1] It is this strong connection to the economy raises and falls that English immigrants had to deal with during their integration into Alexandrian life.

For the largest section of English immigrants who came to the United States in the 19th century to own property and farm, however, Alexandria proved to be as rigid as economic structure as back in England. As one of the oldest and most developed parts of the state, incoming English found that much of the land near Alexandria was dominated by large, slave-owning estates such Mount Vernon, the high land value impractical to invest when cheaper property could be had out west. In the 1860’s, there were only four citizens in the census who identified as a farmer, and only one was English.[2] George Peverell, age fifty and father of four, appears to be a low skilled or poor farmers as he could neither read nor write and his property was only valued at two hundred and fifty dollars, as his address is unknown he most likely was a sharecropper or farm hand living on others property.[3] Unlike many other places in the United States were unskilled laborers could find decent work, Alexandria’s slave trade meant that farm labor could be sourced cheaply, thus making it difficult for poor and low skill farmers such as George to make a decent living. However, on the census in 1870 after the Civil war, George’s wealth expands to three thousand dollars of property value which could be related to the demand labor after the abolition of slavery after the war and added competitiveness that came from it.[4] This economic mobility for a poor farmer in the highly developed city of Alexandria shows why English immigrants came to the United States, for the unparalleled opportunity for economic advancement not possible back in England.

Pre and post industrial labor, those skills involving factory work but as older skills such as carpentry, masonry, building, engraving, tailory, and other artisan tasks that were not replaced by machines and low-skilled workers could be found all throughout Alexandria. English immigrants, many who came to the United States because of lax labor laws in England, found good work accommodations in the United States with author of Britons in American Labor, Clifton K. Yearly Jr., stating that because of their previous experience from England that “many English… immigrants rose to become superintendents or foremen as the result of their experience and skill.”[5] One important facet of English immigrant were labor unions, as previously stated that English industrial monopolies and influence. To that end, English immigrants across the national and especially in the metro area helped to create the first national union with author Rowland Berthoff  stating that”British immigrants were pillars of the National Labor Union of the late 1860’s”[6] The NLU represented for many English immigrants the  However, some in Alexandria did not find the efforts of English immigrants in forming unions to be beneficial to either the economy or individual workers. In a piece in the Alexandria Gazette on the National Labor Union, the columnist writes that these unions only existed to scrap the money out of hard workers pockets and that they were dependent on “such laborers as are green enough to be fooled out of their money by those who are too lazy to work”.[7] This turned out to be accurate as despite it’s success, the Nation Labor Union was short-lived as the 1870s depression after the in the Civil War sharply cut down on membership as the dues and 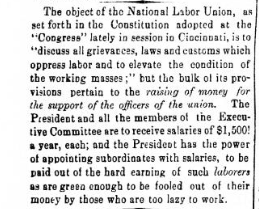 One of the most lucrative was that of the professional commercial, those who dealt it consumer goods and services such as grocers, druggists, merchants, and hotel owners whose value exceeded tens of thousands of dollars.The richest immigrant recorded on the 1860 census was an Englishman named James Green whose value exceeded two hundred and twenty thousand dollars, a princely sum and evidence that English immigrants had little difficulty in reaching the upper echelon of society in Alexandria.[8] One such example of a British immigrant family that was the upper would be the Bell family. The Patriarch of the family, Robert Bell Sr. who was born in Cambridgeshire, England and immigrated to the United States where he started a book and stationery shop in 1837.[9] In the 1860 census, Robert Bell was in the top ten richest immigrants, of whom half came from England.[10] The 1860 Alexandria Gazette shows that Bell marketed his store with English products such as pens manufactured in Birmingham and religious lectures from Liverpool, demonstrating a cultural value that he and his patrons placed on their heritage.[11] The Bell family was also involved in the slave trade via Robert’s son who owned a mulatto slave girl.[12] After Robert Bell Sr. retired from his business, his sons, Charles and Frank, took over the family business and continued selling books and stationery products.[13] This shows the generational wealth and that many English immigrants hoped to create by coming to the United States

One vital facet of the English immigrant economic experience in the mid-nineteenth century Alexandria was slavery. In a morbid way, slavery demonstrated how well English immigrants integrated into American society as the practice had been outlawed in England and Wales since the Somerset v. Stewart decision in 1772. Despite this, English immigrants quickly adapted to the Alexandrian economy and participated in the slave trade, and as some of the richest immigrants, English participated at higher rates. According to the University of Virginia’s  Institute for Advanced Technology in the Humanities, fifteen English immigrant households in the city of Alexandria owned and or rented slaves, which was much higher than other immigrants such as German or Irish, sometimes with more slaves in a house than English.[14] In the census, the top two businesses in Alexandria whose proprietors exploited slavery; Mount Vernon, that was owned by the descendants of George Washington, who had English heritage and used hundreds of slaves on their plantation; James Green, who was a first generation English immigrant who owned slaves.[15] With some of the richest individuals in Alexandria participating in slavery, it is not difficult to understand how English immigrants in the city would see owning another human being as a symbol of status and integration despite its negative impact on the majority of English immigrants who had to compete against forced labor in the job market.

For better or for worse, English immigrants who came to the United States and Alexandria were among the most involved in the city’s economic ventures. While not having the land or economic climate for most farmers, these immigrants how remained carved out a place for themselves in the highly developed and competitive agricultural sector of Virginia. English immigrants who worked in pre-industrial labor also tried to make a place for themselves by creating unions and lobbying for better working conditions, higher wages, and reasonable work hours. Undoubtedly, commerce is where English immigrants found the most success in Alexandria, holding powerful positions as merchants, store and hotel owners which helped elevate them to be one of the richest immigrant groups in Alexandria. It is unfortunate then that because of this success and desire to adopt that led English immigrants to the slave trade which morally unjust, but also economically unstable as the Civil war would see their assets disappear after the Emancipation Proclamation. English participation in all sectors of the Alexandrian economy shows that these immigrants were heavily invested in integrating into American society however they could. This is reflected in the literature on English immigration during the nineteenth, with authors such as W.S. Shepperson stating that “self-sufficiency and individual enterprise” were the driving factors of these English “conservative artisans and mechanics” immigrants who wished to make America and Alexandria their new homes.[16] English immigrants were well-integrated into American society economically, this meant that they were subject to the

[15]Harold W. Hurst, Alexandria on the Potomac: The Portrait of an Antebellum Community (Lanham: University Press of America, 1991) 123.