Although Ethiopian immigrants were highly dispersed throughout the Washington, DC metropolitan area, many created social networks through their religion, which allowed them to maintain and preserve their ethnic identity after they resettled in the United States. One of the religions that were transported from Ethiopia to the United States was the Ethiopian Orthodox Church. As demonstrated in Bill Broadway’s Washington Post article from May 2, 1998, “For Ethiopians, Church a Home Far from Home: Orthodox Christian Community Keeps Tradition Alive in D.C. Area,” the Ethiopian community created a noticeable impression upon the landscape.[1] 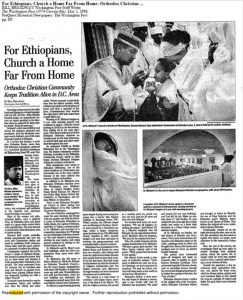 It becomes apparent through Broadway’s article that St. Michael’s church service was being held “in a converted electrical warehouse ….”[3] While transforming an old warehouse into a church may seem odd to an outsider or member of a well-established and funded religious organization, according to Elizabeth Chacko, this is an example of heterolocalism and ethnic place-making.[4] Ethiopian immigrants could not immediately afford the high costs associated with building a new church in the Washington, DC metropolitan area. Therefore, rather than wait until funding became available, they renovated a warehouse and held church services there as a temporary solution. In the end, this decision provided an ethnic institution where Ethiopian immigrants could meet one another, wear traditional clothing, and perform native song and dance.[5]

[1] Bill Broadway, “For Ethiopians, Church a Home Far from Home: Orthodox Christian Community Keeps Tradition Alive in D.C. Area,” Washington Post, May 2, 1998, D8.
[2] Ibid.
[3] Ibid.
[4] Elizabeth Chacko, “Ethiopian Ethos and the Making of Ethnic Places in the Washington Metropolitan Area,” Journal of Cultural Geography 20, no. 2 (Spring-Summer 2003): 24, 28. Chacko is a geography and international affairs professor at George Washington University. She has completed field work in a number of countries, including Ethiopia.
[5] Ibid.