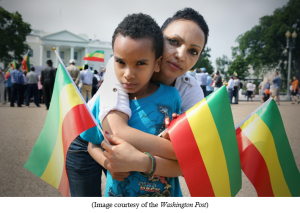 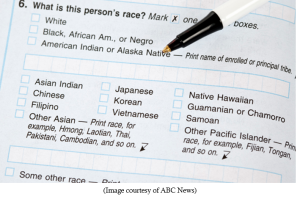 Like other immigrant groups, Ethiopians struggle with fitting into American society while also attempting to stay true to their heritage. This is especially true for younger Ethiopians in American public schools. For non-native Blacks in the United States, racial identification is a complicated issue. Non-native Blacks, including Ethiopian immigrants, strongly resist identifying with American Blacks for reasons such as prejudice, a dislike of an “undistinguished Black identity,” and pride in their identity as Ethiopians.[1] Although Ethiopian families attempt to instill African identity into their children, they often face pressure to make “Black” their main identifying characterization.[2] Many younger Ethiopians also experience opportunities where their identities change depending on their social settings. The response to the question “Who am I?” changes based on the situation, such as with friends or family and their location, which creates a fluid identity that is constantly changing.[3]

Cultural anthropologist Shelly Habecker studied Ethiopian identity in the United States in her case study titled, “Not black, but Habasha.” Habecker explains the internal struggle Ethiopians face when asked to identify by race, because many do not classify themselves as “Black.” Some new Ethiopian immigrants were offended by the idea that they were supposed to check the “Black” box on paperwork. One man claimed in her study, “Of course we don’t have pink skin like you, but I don’t think I am a black man. I am an Ethiopian.”[4] This man, as well as many other Ethiopian immigrants, check the “Other” box when asked to identify their race on paperwork. Ethiopians are proud of their heritage and many refuse to give up and identify as “Black” or “African American.” These immigrants are trying to find the balance of assimilating into their new home in the US, while still holding onto their Ethiopian identity while simultaneously instilling it into their children.