Migrants decide to move to a new country for a plethora of reasons. Some migrate in order to take advantage of new opportunities that are not provided in their home countries, and others move to avoid adverse conditions back home. Coming from a different culture, the United States can feel strange as migrants adjust, and learn the social norms within the United States. Many believe that migrants simply “assimilate” into American culture, but that is rarely the case. Migrants learn to blend their old customs with the American ones. They adapt to their new home.

For Afomia Wendemagegn, she migrated to the U.S. at the age of seven. Her family had made the move while she was young in order for Wendemagegn to adapt more quickly and with ease, especially to the American educational system. A better education was the opportunity that the Wendemagegn family was seeking in the U.S.[i] Traveling from Ethiopia, the Wendemagegn family reached out to relatives for support. At first, the family lived with an aunt in Fairfax County, Virginia. Soon thereafter, they moved to an apartment on King Street in Alexandria, Virginia.[ii]

For decades, immigrants, such as the Wendemagegn family, chose the United States as their final destination.[iii] Wendemagegn never forgot where she came from. Her family lived in a neighborhood filled with other African families, from Ethiopia and elsewhere.[iv] For Wendemagegn, food was key to maintaining a connection to her own heritage and her family. While in America, the Wendemagegn family continued to celebrate Ethiopian holidays, like  Genna, or Christmas. Instead of gifts, Ethiopians emphasize family time and food during the holiday.[v] Family elders also continue to speak Amharic, Wendemagegn’s native language, in order to keep their heritage alive. 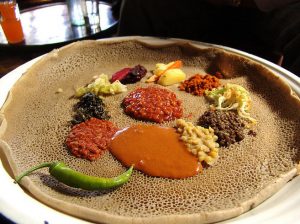 Migrants move to countries like the United States in order to access educational and economic opportunities. The Wendemagegn family moved to the US to advance their children’s education in hopes that they would have a brighter future. While in the US the family maintained their traditions and culture, they believe in the “American Dream.”