The nail care industry in the United States is uniquely dominated by female Vietnamese immigrants. Alexandria, Virginia is no exception. The appearance of Vietnamese American manicurists began in California in the 1970s, resulting from the humanitarian efforts of film actress Tippi Hedren.[1] Hedren used her personal manicurist to train Vietnamese women living in the refugee camp in which she volunteered.[2] Following the boom on the West Coast, more and more Vietnamese American women (as well as men to a lesser extent) turned to nail-care as a way to establish themselves in their new homes. Immigrants interested in nail care used training schools to both pursue employment and ease their transition into American society. A 1994 article from the Washington Post describes the student body of The Potomac Academy of Hair Design, a cosmetology school in Falls Church, Virginia.  While some of the women were native born Americans, the vast majority were immigrants, mostly from Ethiopia and Vietnam.  The high demand for manicurists, as well as additional programs, such as English language lessons offered by beauty schools, made nail care attractive for immigrant women.[3] Thanh-Tuyen Thai, a student at the school, stated that while she and her sisters were trained for other occupations in their home country, their mother urged them to learn nail-care, seeing it as a marketable and reliable skill.[4]

Such was also the case for Binh “Gene” Nguyen, who established a popular nail salon/academy in Alexandria in 1988[5]. Nguyen’s family first became involved in nail care when they first immigrated to California in 1983.[6]  After arriving as refugees, they were able to quickly find jobs as manicurists and begin to acclimate to their new surroundings. Vietnamese Americans like the Nguyens, who settled initially in California, continued the trend begun by Hedren and spread it eastward. Vietnamese Americans now make up eighty percent of the licensed manicurists in California.[7] 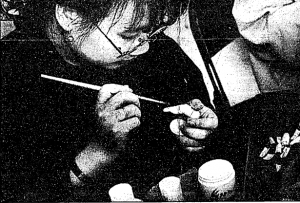 [3] Megan Rosenfeld, “At the Head of the Class: Beauty School Offers Some a Permanent Place”. The Washington Post, October 7, 1994.