In the 1940 US Census, 36 year old, Christ Michael (Chris) Trahos lived in Ward Three at 705 King Street in a hotel. He was a restaurant owner and single. In the same building lived Norman Trahos a 25-year-old who was also single but unemployed. Norman was most likely Christ’s brother or perhaps his cousin, due to their same last name and closeness in age.

A conflict with a waitress over hours in 1939 was the first time that Christ appeared in the Washington Post.[2] Trahos hired an attorney in the case since a labor inspector pressed charges. 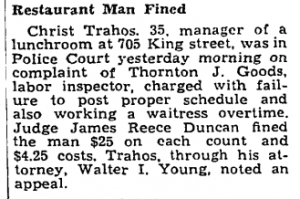 Christ Trahos died on September 18, 1987 at Jefferson Memorial Hospital, in Charlestown, West Virginia.[3] In Christ’s obituary we can find additional information about his family. At the time of the 1940 U.S. Census, Christ was single; however, he eventually married a woman named Aleke and had three children. 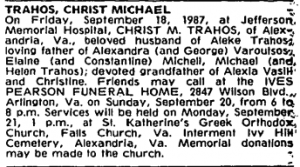 There is little information about Norman Trahos from the the Washington Post other than one article from September 20, 1943.[4] He was among forty-four men reporting to serve in the armed forces during World War II after being inducted on August 31.  It is likely that Norman simply moved away after joining the army and left the Alexandria area. 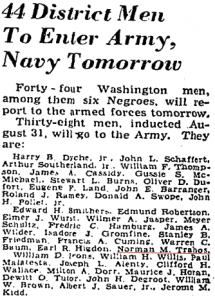 Both of the Trahos’s show up in primary sources, through which we can track some aspects of their lives.  It is clear that Christ had owned the restaurant some time before the 1940 U.S. Census because he appeared in the newspaper a year earlier. His 1987 obituary is the only other time he appears in the Washington Post. Less information is available about Norman Trahos who joined the army in 1943; this is the only mention of Norman in the Washington Post. Christ and Norman were never mentioned together in the Washington Post or in any documents aside from the 1940 U.S. Census. The fact that they share the same last name and live in the same home are the only evidence that point to the possibility that they were related to one another.