As Charlotte Erikson discusses in her book, Invisible Immigrants: The Adaption of English and Scottish Immigrants in Nineteenth Century America, mostly English immigrants with professions or artisanal skills settled in cities.[1] According to the 1860 U.S. Cenus, William Cogan was one such immigrant who made a life for himself in Alexandria, Virginia. Cogan was listed as a twenty-nine year old gas fitter, with a property value of $4,500.[2] He was married to twenty-three year old Virginian named Virginia Barton with whom he had three children: Virginia, John, and William.[3] In addition, according to Don DeBats’s Voting Viva Voce project, Cogan was an independent head of household owning his own home, and was financially well-off.  His household was in the next to top category for both declared and taxable wealth[4].

Upon further research, Cogan was named on the passenger manifest list for General Victoria (unable to determine if the ship was British or American) for the departure leaving London and arriving in New York City on May 28, 1845.[5] He was 15 years old at the time. Cogan does not show up in many archival records until his marriage certificate to Virginia Barton on October 4, 1853, in Alexandria.[6] Cogan and his wife remained in Alexandria through the duration of their marriage although they moved around the city. What is interesting is that in different censuses and city directories, the family was listed as living at different addresses. According to DeBats’s Voting Viva Voce project, they lived at 38 South Pitt Street.[7] In 1880, they lived on 115 East Royal Street.[8] In 1900, Virginia was a widower; however, she and her eleven children lived on King Street[9].  In 1912, according to the city directory, Virginia and her children then lived on 1012 Prince Street[10]. One possible explanation for the family’s constant moving could be that the family was continually growing and was looking for more adequate housing or improved housing.

The most intriguing aspect of the Cogan family’s lives gleaned from the census data and other archival sources was that the Cogans did not lose money during the American Civil War. Instead, Cogan actually increased his wealth by a significant amount. As mentioned previously, the 1860 U.S. Census listed him as having a property value of $4,500[11].  Adecade later, Cogan had a property value of $10,000.[12] His increase in wealth could have been the result of many factors, such as he did not own any slaves and therefore did not lose property during the war; however, after some digging, I believe that William’s wealth increased because he was a successful business man.[13] Cogan’s Gas and Steam Fitter Establishment appeared to be a well-established company and was advertised throughout the 1860s in both the Local Paper and the Alexandria Gazette. The Cogan’s wealth may have also been an additional reason the family moved around throughout Alexandria.

The following images are samples of William Cogan’s advertisements in the local papers. 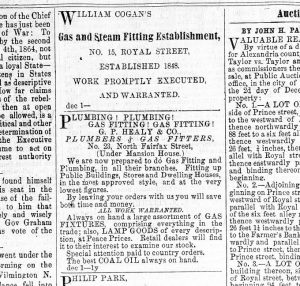 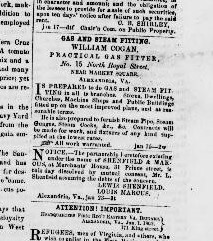