While digging through the data from the 1870 U.S. Census for Alexandria’s 3rd Ward, I came across David Bendheim and his wife, Fanny Lauer Bendheim, and their family. While looking at the information on their household, I realized they must have been one of the more wealthy immigrant families at the time. This made me want to dig deeper into their family history.  Using census data and other reliable internet sources, I was able to piece together information about members of the Bendheim family during the mid-to-late nineteenth century.

The Bendheims were a middle-class, German Jewish family who had emigrated from Baden to become successful merchants in Alexandria.[1] The Bendheims lived on the 500-block of King Street, in the middle of the central business district.[2] As the Alexandria census data in 1870 shows, David Bendheim became a dry goods merchant while his wife Fanny’s occupation was keeping house.  The census data also shows that they were a middle-class family, having a combined property of $1,500.[3] In the 1880 U.S. Census, the Bendheims had moved to Ward 2, but were still working as dry goods merchants.[4]

David and Fanny’s children also went on to play important roles in Alexandria society. The Bendheims’ daughter, Rachel, married Max Pretzfelder. Pretzfelder was also a prominent dry goods merchant in the 500 block of King Street.[5] The Bendheims’ son, Charles, had a career in politics in Alexandria. He became a member of City Council, Clerk of the Courts, and a Virginia Assemblyman. An article from the Evening Star in 1905 shows his election as Clerk of the Courts. Charles ended up marrying Edith Schwartz.[6]Her father, Isaac Schwartz, was also merchant in Alexandria.[7] 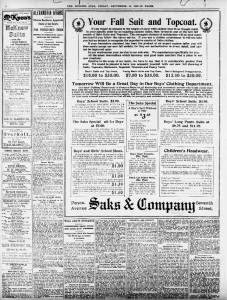 Continuing generations of Bendheims also had played important political roles in Alexandria, Virginia.  When David and Fanny Bendheim came to Alexandria from Baden, they started a prominent family that continues to impact Alexandria today.