An analysis of World War I draft cards from Alexandria, Virginia shows the same type of work and immigration patterns David Mauk presents in his book, The Colony That Rose from the Sea: Norwegian Maritime Migration and Community in Brooklyn, 1850-1910. Mauk’s book focuses on Norwegians who settled in Brooklyn, New York; however, one finds a similar occupation pattern among Scandinavian immigrants in Alexandria. These men emigrated without their families and worked in shipbuilding. 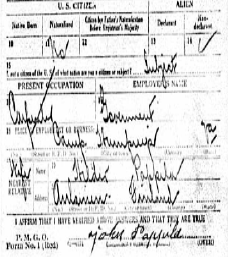 The World War I draft card of John Pappila, a Finnish non-declared alien carpenter who worked at Campy Humphrey.

A majority of the Scandanavian men found in the draft cards, were non-declared aliens who found jobs working at the Virginia Shipbuilding Corporation as carpenters and laborers. Others worked at Camp Humphrey (which would later be renamed Fort Belvoir). Out of eighteen individuals identified in the draft cards, eleven worked for the Virginia Shipbuilding Corporation; of those eleven, only one was a carpenter, and the rest had occupations ranging from rigger to tool maker. Out of the remaining seven, five worked as carpenters at Camp Humphrey. The last two men were laborers who did not list their employer; another was self-employed.. These work patterns showed Scandinavian reliance on the shipbuilding industry and on carpentry.

Draft cards not only give insight into work patterns amongst Scandinavian immigrants in Alexandria, but also insight into family migration patterns. Of the eighteen individuals, ten listed their next of kin as family members still living in northern Europe. Two listed family members in Alexandria, and six did not list next of kin or claimed that they had none. This phenomenon affirmed migration patterns described by Mauk where Scandinavian men traveled to port cities in North America to work and sent money back to their families. Eventually, they might send for their families once they became established in the U.S.

World War I draft cards for Alexandria give insight into Scandinavian emigration patterns. A majority of men worked in the shipping industry or as carpenters, and left their families behind. This phenomena raises further interesting questions into whether every port with Scandinavian settlers followed similar patterns.