With the introduction of Communism to China by the late 1940’s, Chinese came to the US in increasing numbers as refugees. Immigration to the US for the Chinese, however, was still a difficult process. Laws, like the Chinese Exclusion Act of 1882, had previously made it difficult for Chinese to immigrate though it was repealed in 1943 with the passage of the Magnus Act. Nevertheless, very few Chinese could legally enter the country even after Chinese Exclusions’ appeal.  Chinese, however, found ways of working around these laws, using tactics like the creation of “paper sons” where immigrants purchased papers from U.S. born Chinese and falsified their relationship with that person.

The Chin/Soo Hoo family from Alexandria, Virginia stands out as a possible “paper son” situation. Immigration officials became suspicious of the Soo Hoo family after one daughter, who was trying to immigrate in 1952, supposedly claimed her name to be Chin Mee instead of Soo Hoo Mee. Another issue with Chin’s testimony is the family that she names. During her interview, she only identified her father, mother and one brother. Soo Hoo Sui, her “father,” claimed that he had six children. These inconsistencies in her story created doubts about the rest of the family and resulted in an in depth investigation.

The investigation into the Chin/Soo Hoo family brought to light further inconsistencies and suspicious circumstances. Soo Hoo Sui, or as his daughter identifies him, Chin Chung Wong, claimed citizenship through his own father, Soo Hoo Quong Twey. Quong Twey was supposedly born in San Francisco sometime before 1900; however, there were no records of his birth.  His papers were most likely destroyed in the fires that ravaged San Francisco after the 1906 Earthquake.1

To add further confusion, the Chin family was questioned about their relationship with the Soo Hoos’. During an interview in 1964, Soo Hoo Sui claimed that he and Chuck Chin had been partners in business for twelve years and lived in the same home, but were not related. Immigration officials believed that Chin Lun, the patriarch of the Chin family and the father of Chuck Chin, was actually Soo Hoo Sui’s father, but Sui denied it.  At one point Chuck Lam Chin also made additional confusing claims. He stated that he didn’t know if his godmother, Lee Yok Sun was related to Soo Hoo Sui’s wife, Mak Shee. He apparently said this because his godmother’s, husband’s surname was also Mark or Mak.

At the conclusion of the investigation into the Soo Hoo family, Soo Hoo Mee was issued a U.S. passport. The final statement made by the Immigration and Naturalization service was, “inconsistencies were noted but no proof of alienage was obtained.”2 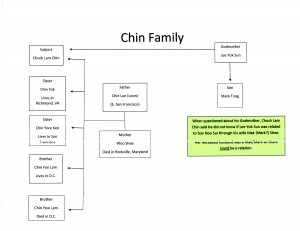 This is a family tree for the Chin family, created with information given by Chuck Lam Chin. 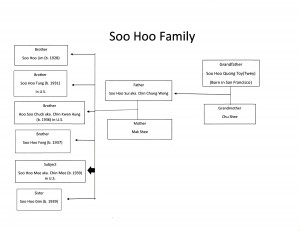 This family tree was created using information given by Soo Hoo Sui and Soo Hoo Mee.

1 “Chinese Immigration and the Chinese in the United States.” http://www.archives.gov/research/chinese-americans/guide.html#immigration (accessed October 30, 2014).