Many Chinese immigrants had great difficulty entering the United States during the twentieth century because of strict Chinese exclusion policies from 1882 to 1943.  Despite strict immigration laws, some Chinese immigrants were able to gain entry as “paper sons.” According to Estelle Lau in her dissertation “Paper Families: Identity, Immigration Administration, and Chinese Exclusion,” paper sons was a

“technique stemmed from the loophole in the law that granted children of U.S. citizens regardless of place of birth, eligibility for U.S. citizenship, and thus, immigration to the U.S. Taking advantage of this loophole U.S. citizens of Chinese descent created fictive or “paper” children whose kinship status could be used by individuals who would be otherwise denied entry.”1

The practice of “paper sons” provided many Chinese immigrants with the ability to evade immigration laws and claim that certain family members were U.S. citizens.  One family who might have included “paper sons” was the Chus. 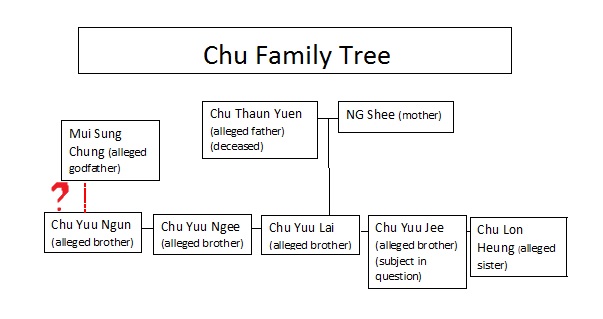 According to a case file maintained by the U.S. Immigration and Naturalization Service, four sons claimed to be children of Chu Thaun Yuen (deceased 1921), who was allegedly born in the U.S.  The Chu brothers each came to the U.S. starting with Chu Yuu Ngun.  In 1933, immigration officials interviewed Chu Yuu Ngun as part of a hearing on the admittance of Chu Yuu Jee (another supposed brother). One interesting pieces of information from this interview was that the four Chu brothers had the same godfather who was living in the U.S. and supporting them. His name was Mui Sung Chung.2  Although the Chu brothers had an alleged godfather, Mui did not show up for Chu Yuu Jee’s hearing.  According to Chu Yuu Ngun, Mui Sung Chui’s absence was “because the representative said it wouldn’t be necessary.”3 It can be suspected that Mui was not the Chus’ godfather, but actually their biological father. Immigration inspectors, despite detailed interrogation of the Chu boys and minor inconsistencies with their testimonies, were not able to prove that the Chus were not sons of native born Chu Thaun Yuen.

In 1943, Chu Yuu Jee’s citizenship status was investigated again when he filed for a petition for naturalization while he was in the U.S. Army.  He claimed that “he became confused as to whether or not he was a citizen.” Chu’s immigration file and testimonies from 1933 and 1934 were reexamined, and it was determined that he was granted admittance into the country as the son of native born Chu Thaun Yuen and was already a citizen.