Until the mid-1960s, Chinese immigrants to the United States were mostly barred from entering the country.  The Chinese Exclusion Act of 1882 was originally passed to ban Chinese immigrant laborers from admittance for ten years, but was extended another ten years in 1892 and then made permanent in 1902.  From that point until the middle of the twentieth century, Chinese immigrants were almost completely prevented from entering the country.  There was, however, one way in which an immigrant laborer could enter the country; if an immigrant could prove that s/he had a parent who was a U.S. citizen, then s/he would be granted entry.  As a result, many Chinese would exploit this loophole to enter the country fraudulently.  Those Chinese who entered the country in this manner became known as “paper sons” and “paper daughters” due to their gaining entry by purchasing the documents of Chinese who were already citizens and then falsifying them.  In the 1960s, one family was investigated on suspicion of being a “paper family” in Alexandria, Virginia. 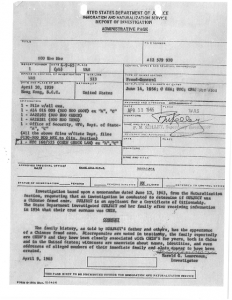 The problem began when an immigrant, Soo Hoo Mee,  applied for a passport and citizenship.  During the process, someone told the Hong Kong consulate that the family’s surname was Chin and not Soo.  Soo’s father, allegedly Soo Hoo Sooy, attempted to explain that the family knew the Chin family through a business relationship, but they were not related.  The Soos also lived in a village that consisted of only Chins except for themselves. Investigators found this situation suspect.  There was also debate regarding the father of Soo Hoo Sooy.  In an interview dated April 20, 1964, Soo states that his father’s name is Soo Hoo Quong Tooy and that Chuck Chin was the son of Chin Loon; however, investigators had reason to believe that Chin Loon was in fact Soo’s father.  In his interview, Chuck Chin upheld the claim that his father and Soo Hoo Sooy’s father were friends, but were not related.  The real problem came during Soo Hoo Mee’s interview with the U.S. consulate in Hong Kong in which she or someone close to her claimed that she was really a Chin, and that her real name was Chin Yee Mee.  Although they could never prove the family’s true identity, immigration officials believed that the family was brought to the U.S. based upon bought documents and a created identity.

Piecing together the puzzle of the Chin/Soo family is incredibly difficult and only gives evidence to the difficulty the federal government faced in trying to catch paper families.  All across the United States, investigations were opened in an attempt to catch these families.  However, this process proved to be ineffective in stopping Chinese immigrants from entering the country illegally; in fact, it is estimated that as many as 97 percent of Chinese who entered the U.S. illegally were never caught.  The Soo/Chin family was just a small part of the large numbers of Chinese immigrants who did what they could to bypass the Chinese Exclusion Act to gain access to the United States.