The 1870 and 1880 U.S. Censuses allow historians not only to identify the names of families in late nineteenth-century Alexandria, Virginia, but also to see trends regarding occupation and place of origin. One of the most notable groups of immigrants (and their American-born descendants) were those of German-Jewish origin. These immigrants came from territories such as Prussia, Bavaria, Baden, Hanover, and Darmstadt. Many who settled in Alexandria were attracted to the economic opportunities, especially before and during the Civil War.

Alexandria was under Union control by May 1861, and the city served as a transport hub. As supplies and soldiers were sent south, fears of betraying the Union drove the federal government to require all employees and military personnel, and later the general populace, to sign an Oath of Loyalty. Those who failed to sign this oath faced being driven from their homes.[1] For German-Jews who supported the Confederacy, signing this oath was problematic. Jewish tradition taught respect and obedience to the established government, which for pro-slavery Jews referred to the Confederate government.[2] Signing the Oath of Loyalty, which pledged that the signer would support the cause of the Union, would have been a significant violation of this tradition of obedience. 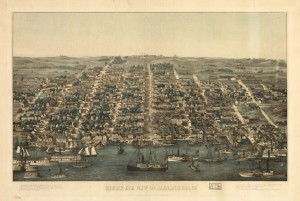 An example of a German-Jewish immigrant who signed the Oath of Loyalty was Simon Blondheim. Simon lived in Alexandria at the time of the Civil War and was listed on the Oath of Loyalty as a merchant.[3] The 1870 U.S. Census listed Blondheim living in Ward 1 of the city with his wife, Bertha, who was American-born. Ward 1 was one of the wealthier sections of Alexandria depending on your address during the mid- to late-ineteenth century.  Blondheim’s presence indicates that he was probably middle-class. However, the 1880 U.S. Census shows the Blondheims and their ten children living in Ward 2, which was predominantly settled by immigrants, including those from German states. Blondheim’s reasons for moving to a section of Alexandria that was predominantly settled by immigrants possibly related to a desire to have stronger connections with other members of Alexandria’s growing German-Jewish community. Blondheim was a clothes dealer in the 1870 U.S. Census, but in the 1880 one, he was listed as a grocer. The reason for his occupational changes are unknown, but he desired to make more money or that groceries was simply a much more prosperous business.

Signing the Oath of Loyalty indicated that Blondheim was one of the German-Jews in Virginia who was prominent enough to draw enough attention to himself that he could have been suspected to be loyal to the Confederacy. Signing the Oath, however, didn’t necessarily mean that he supported the Union or abolitionist ideologies. He may have sincerely believed in southern values regarding race and slavery; he may have only signed the Oath to ensure that he could remain living in Alexandria.  His position on the Civil War is unknown.

German-Jews before and during the Civil War understood the fact that if they wanted to be accepted by southern white society, they had to accept southern customs and values, including slavery. [4]   Many southern Jews at the outbreak of the Civil War perceived northern abolitionists to be anti-Semitic, and these same Jews didn’t want abolitionist efforts to eliminate slavery and jeopardize the hard-earned gains of equality that they had obtained as a result of their acceptance of the southern racial hierarchy. [5] Signing an Oath of Loyalty for some Jews then, can be understood as being a personal conflict between maintaining social equality among their white peers and protecting their homes and livelihoods during a time of political and social chaos.  It could also mean that they recognized that slavery was wrong, and supported the Union.  There are many reasons for signing such an Oath.