Greek immigrants who settled in the cities of the American South sought to fill a niche in their adopted communities. Food service proved to be an efficient way to accomplish this goal.[1] The vast majority of self-employed Greeks owned restaurants, candy stores, fruit stalls, grocery stores, and other businesses that fed the communities they settled in.[2] These businesses were easy to establish; they did not require a large amount of skill, money, or English language  to operate, and allowed Greek immigrants to adapt to the ways of their American clientele.[3] Through food service, Greeks benefited from the expanding populations in Southern cities. Most Greeks in this field chose to open restaurants and lunchrooms, since those were sorely needed by industrial workers on their lunch breaks.[4] Although Greeks owned restaurants and lunchrooms in Alexandria, I decided to focus my post on Greek confectioners and their presence in Alexandria. 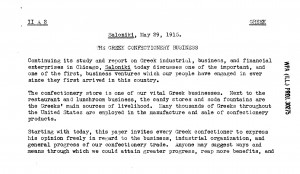 While examining the U.S. Censuses for Alexandria from 1920 and 1940, I was surprised by the apparent lack of Greek immigrant confectioneries in Alexandria during this period. The only two examples that I found in the 1920 census were both in Ward 4. One, listed as “James” with an illegible surname is described as a confectioner, and the other, Antone Somoragas, is listed as a partner in a confectionary. Twenty years later, a James Constantinople can be found in Ward 4 of the 1940 U.S. Census, with an age that matches him to the “James” in the 1920 census, but he is listed as a clerk in a restaurant, probably owned by Antone’s wife, Helen. The lack of Greeks in the Alexandria candy business is unusual when compared with the rest of the United States. Through the course of my research, I discovered a translated article in the Foreign Language Press Survey that was originally published in a Greek language newspaper, The Saloniki-Greek Press, in 1915. The article was an opinion piece emphasizing the importance of confectionary businesses in the Greek immigrant community of Chicago. “One of our vital Greek businesses. Next to the restaurant and lunchroom business, the candy stores and soda fountains are the Greeks’ main sources of livelihood.”[5] If so many Greeks in other cities supported themselves by selling candy, ice cream, and other treats, why was the same not true in Alexandria?

The number of Greek confectioners in early twentieth century Alexandria may have been affected by both the size of Alexandria, the needs of its population, and the presence of well-established, non-Greek confectioners. While Alexandria expanded fairly rapidly after the Civil War, it was still a comparatively small city. Restaurants and quick lunch eateries, as well as grocery stores, were a more profitable venture for Greek immigrants. Alexandria’s growth stemmed from the expansion of the federal government and industrialization, bringing more and more workers into the Washington Metropolitan Area.[6] As previously discussed, the workers needed fast lunches during their noon breaks, and Greeks could provide them with what they needed. Businessmen such as James Constantinople may have wanted to work in several types of food services, rather than confectionery, to maximize profits.  If Greeks moved from one type of food service to another as the needs of the community changed, they could potentially do better for themselves. While Greek immigrants in other cities may have enjoyed success in the candy business, the environment of Alexandria did not make sweets a priority for Greek entrepreneurs.