The Fruit Growers Express was a company formed in 1920 after the “federal government ordered Armour and Company to sell its fruit-shipping subsidiary following an antitrust decision.” [1] Because the city of Alexandria had the Potomac River and different railroad systems, it was a hotspot for transportation, leading to the success of the FGE company. Located originally at the Potomac Freight Yard, the company then moved to the Cameron Freight Yard, near Telegraph Road and Duke Street because more space was needed due to expansion. [2] According to Alexandria’s local government’s website, at the company’s peak in the 1920s, “FGE could produce as many as 1,000 refrigerated cars a year.” [3] 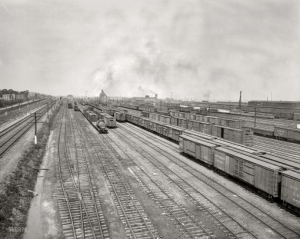 Potomac Freight Yard in 1916, Image from the Library of Congress

1940 U.S. Census, John Guiseppi was a car repairer for FGE

In Donna R. Gabaccia’s Italy’s Many Diasporas, she wrote of the Italian immigrants did not have much money or education, and were laborers when they immigrated to America, especially between 1870 and 1940.[7] A car repairer or carpenter were potentially lower-level jobs, but not necessarily in the railroad industry. They required skills, and were well paying.  John Guiseppe’s wages, for example, was $1200.[8] Frank Attilis, who was also a car repairer for FGE, had a salary received at $1300, not much more than Guiseppe.[9]

Immigrating to Alexandria allowed for many opportunities for skilled jobs due to the railroads. Many of the Italians who worked for the Fruit Growers Express, allowing them to provide for their families (both in the U.S. and abroad) and potentially future Italian immigrants.